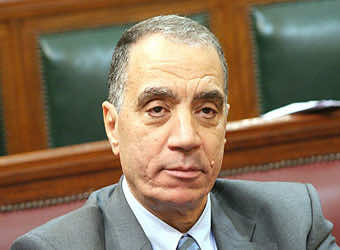 The head of Egypt’s central bank, Faruq el-Okda, has resigned and will be replaced by his ex-deputy Hisham Ramez, the president’s spokesman Yassir Ali said on Thursday at a news conference attended by both men.

Ali said Ramez will replace Okda in February. “I am very happy with this civilised transfer,” Okda told reporters.

Okda, who has headed the bank since 2003, downplayed differences with the presidency and said he had asked last year that the bank governor’s tenure be limited to two four-year terms.

An IMF loan expected to boost the economy has also been delayed as Mubarak’s successor Mohamed Morsi battles a renascent opposition movement that resorted to mass rallies in November and December to put pressure on the Islamist leader.

Both Okda and Ramez downplayed the economic crisis on Thursday.

“There is nothing that makes us anxious,” said Ramez, who left the bank in 2011. “It’s not out of control. It’s under control.”

Okda said he was leaving the institution in “safe hands.”

“We have had two very difficult years,” he said of the period after the uprising that brought on the crisis and led to foreign investments shrinking.

“But thank God, the economy is holding. Yes, we have problems, but we will emerge from them,” he said.

The latest sign of concern is the steady fall in the Egyptian pound which was sold at 6.54 pounds to the dollar on Thursday, according to the central bank.

The bank has acknowledged that its foreign exchange reserves have reached a “critical minimum” level.

Reserves have fallen to $15 billion from $36 billion in two years and are enough to cover only three months of imports.

Given the bleak economic scenario, securing the $4.8 billion IMF loan is now considered by many as essential to fuel a recovery.

Discussions on the loan began anew this week in Cairo with Masood Ahmed, IMF representative for the Middle East and Central Asia. In a statement late on Monday, Ahmed said he had “productive” talks with Morsi and top officials.

The Egyptian government said an IMF team will return in weeks to discuss the loan, which is not expected before Egypt holds parliamentary elections, possibly in March or April.