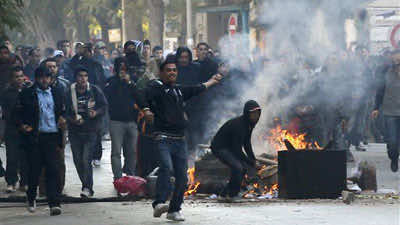 The latest unrest erupted in the afternoon when protesters hurled rocks at the police who responded by firing tear gas, an AFP journalist reported.

The clashes then spread, and the protesters attacked and set fire to a police station, forcing those inside to flee.

Ben Guerdane, around 30 kilometres (20 miles) from the border with Libya, has witnessed sporadic unrest over the past week, fuelled by Tripoli’s decision to close the Ras Jdir border crossing in early September for security reasons.

Demonstrators, most of them traders angry at the damage caused to their business by the closure, clashed with the security forces on Sunday and Monday.

Despite the crossing being reopened on Thursday, the local branch of Tunisia’s main labour union went ahead with a general strike in the border town to demand investment and jobs, with only chemists, hospitals and bakeries remaining open.

Violent attacks by Islamists and a political impasse over the new constitution also continue to threaten the country’s stability.