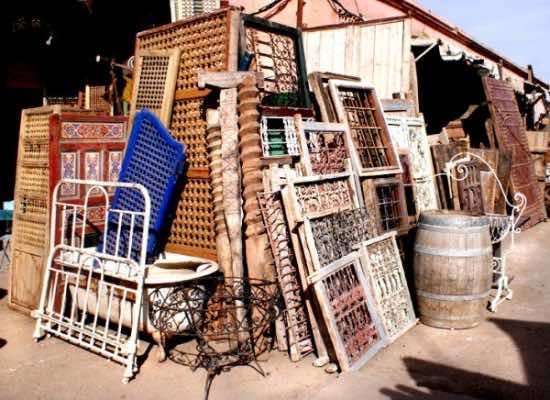 The hunt for treasure among the trash leads Derek Workman to the Thursday market at Bab el Khermis.

When painter and writer Danny Moynihan, friend of avant-garde artist Damien Hirst, and author of Boogie Woogie, a novel that dished the dirt on the New York art world, decided to restore a riad in Marrakech’s medina, his first stop was the Bab el Khemis flea market.

“Bab” is the Arabic word for gate and, of the 12 gates in the 12 kilometre long, rose-pink 12th-century wall that wraps around the ancient city, Bab el Kermis is one of the oldest. It takes its name from the Thursday market where once camels, horses, mules and asses were sold. According to Arthur Leared, who travelled the country in 1872, “On the sale of each animal a guarantee that it has not been stolen, verified by a notary, is required”. How anyone could guarantee the provenance of a rag-tag assembly of worn out critters, (and you could probably use the same term for the dealers), many of which had walked hundreds of kilometres across sand and mountain to end up as camel meat on the tables in the open-air restaurants of the Jmaa el Fnaa, remains a mystery.

As it is Thursday, and the Bab el Kermis market has been on my ‘must-do’ list for ages, I saunter off to see what has been described as ‘one of world’s greatest mixes of junk and treasure’ has to offer. I’m secretly hoping that I might find a decent second-hand Brooks bike saddle at a bargain price, as I do at every flea-market I go to. I haven’t as yet, but it doesn’t stop me secretly hoping.

When I get to the gate I’m disappointed not to see the hordes of hustlers and cascading bric-à-tat that I’d imagined. What I mainly see is lots of young men selling mobile phones and accessories. Some are as carefully displayed in small glass cases as the sparklers Audrey Hepburn saw in the window of Tiffany’s when she was on her way to breakfast; others are simply tumbled in a ‘pile it high and sell it cheap’ style, but there’s plenty of action going on. I’m impressed by the chap who has brought a full home gym to sell, and wonder if he brings it every week or simply anchors it to a post until the next Thursday. I hope for the sake of the poor donkeys that he brought it by van, because I’ve got one of them at home, (left by a previous tenant and carefully avoided by me), so I know how much they weigh. 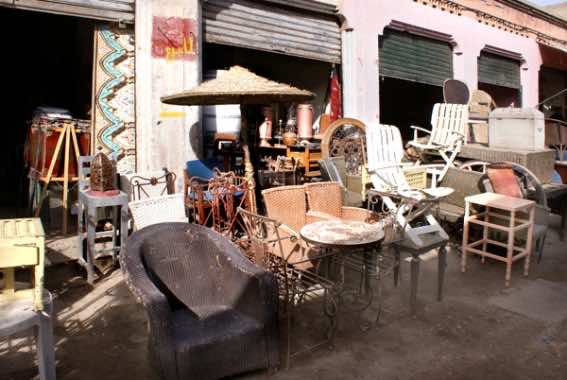 I am equally intrigued by a dentist’s chair, circa 1950. Excellent piece of kit it is, and in fine condition. In fact there were two of them, so the erstwhile punter would be stuck for choice if he only wanted one. Perhaps he was considering opening his own clinic and was looking to bulk buy, and even a pair of chairs nearing pensionable age were a damned site preferable to most of those you see used by peripatetic ‘dentists’ in the souks, something rescued from the kitchen, where they simply plonk the agonised patient down before delving into the dentures with a pair of ancient pliers.

However, it turns out I’ve got the wrong gate. I’m not at the Bab Khermis – that’s a much grander entrance around the corner. I’m at a side entrance, but I’ve been sufficiently entertained by what I’ve seen so far that I decide to dive into the souk and come out by the main gate later, to see if I’m missing anything. I stroll in through an archway that draws me into a clattering, banging, screeching, grinding, shower-of-sparks-flying pandemonium. To everyone else it’s just the daily noise of the metal-workers souk.

Whether it’s something that involves metal in its construction – mopeds, 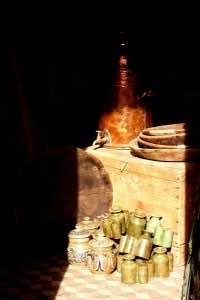 bicycles, ancient sewing machines – or is something that will be made entirely from metal – window grills, decorative arches, tables and chairs – there’s someone here who can fix it or make it. Scattered everywhere are large sheets of metal, long strips of steel two fingers wide, pencil-thin rolled rods that are bent and twisted to create intricate designs. Sparks shoot from angle grinders like spinning Catherine wheels as young men, with no protection other than a pair of sunglasses and a cloth wrapped around their face (and sometimes neither of those) cut, burnish and smooth. Everything is covered by a fine black powder, but this is Morocco, and the dusty monotone is alleviated by the brightly coloured djellabas of passers-by.

Turning away from the street of the metal workers I wander down a cluttered alleyway of wonderful ancient doors, rolls of antique rugs, Lloyd-loom chairs, exquisitely painted tables, worn and patinated with age, a ’50s pram, plastic garden recliners – and yes, I even see the kitchen sink, as well as one for the bathroom, along with its bath, toilet and bidet, all in the chunky cut-corner style of Art Deco.

I also pass men and women squatting on the ground behind piles of odds and ends that can have no conceivable value other than to someone who has nothing of value at all; a Kodak cartridge camera, a pair of stiletto-heeled shoes with one stiletto, an alarm clock with no hands, odd socks, seven-year old magazines in Spanish – similar detritus you can see on every flea-market in the world.

I hear the Koran being sung, the beautiful a cappella coming from a tinny-sounding loudspeaker hung outside a café at an alley junction bustling with second-hand clothes vendors. Anticipating a hot coffee, the sound draws me towards a table like the muezzin calling the faithful to prayer. Parking myself in one of those plastic garden chairs that succumb to too much time in the sun and bend when you lean backwards, I wave at a passing waiter and ask for a café au lait. It could well be my accent, or he may not speak French, but he casts a bemused look around the other clients, obviously not having understood any of the three words I’ve just spoken. “Mint tea,” a voice says in English, but I’ve no idea which table it came from. Obviously coffee’s off the menu. “Bien,” I say, and the waiter goes off to get it. 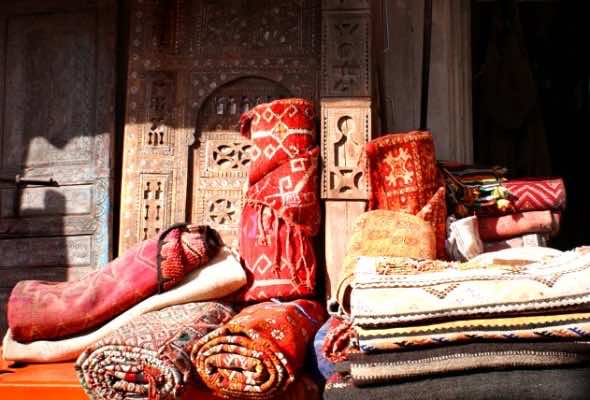 He comes back a couple of minutes later with a glass of something that looks as if it has been sitting around for a while, probably at the bottom of a u-bend of a kitchen sink. I reach into my pocket for some money. “One dirham,” a different voice says. “One dirham!” I think, ten centimos, cheap in any currency, about one-tenth what you would pay elsewhere. I hand the coin over – never look a gift glass in the mouth.

“A mange,” says the chap with the grey stubble and wool bobble hat at the next table. They may not be big conversationalists, but they all helpfully want to get in on the act. I suddenly realise that I’m sat at a workers caff, and everyone else is getting stuck-in to bowls of bean soup or something made from bits of innards whose origin I’d really rather not know. But it’s cheap and fortifying and obviously pretty popular. No-one objects that I’m taking up a table with only a cup of mint sludge, so I sit for a while and watch the second-hand clothes salesman hawking their wares.

Afterwards, I wander into an enclosed part of the furniture makers souk, piled to the ceiling with beds, tables, fat mattresses and, it has to be said, some painfully ugly “mogernised” pieces, (that’s not a typo, it’s a derogatory word a friend invented to cover all the ugliest aspects of modern design).

One of the things that always amazes me is that in Europe, and most probably in the US and elsewhere, so much of the furniture is made from composites; plywood, block-board, chip-board, MDF – sawdust, wood shavings and a lot of glue – but in Morocco furniture is usually made out of proper wood, the stuff that actually comes direct from the trees. Okay, some of it might look as if it has been rescued from pallets, but it’s still wood. 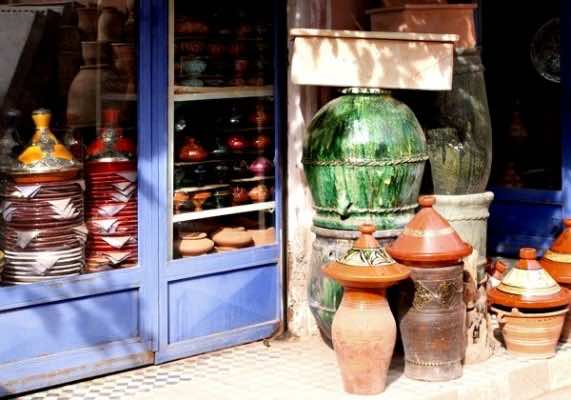 I pass a young lad in his teens carving intricate scroll work in the top of a small table. His curved chisels are almost worn to nothing, from generations of grinding and sharpening. He uses a squared-off length of wood with one end roughly round as a handle as he carefully taps the chisel, turning his hand slowly to create a curve in the scroll, all the while chatting to his friend whose busy planing the sixty degree angle of one of the joints that will form the traditional hexagonal table.

I’m back at my workshop in the Lake District thirty years ago, choosing a length of wood from my scrap box to use as a mallet to carve the finer points of a design, my usual rounded mallet being too weighty for fine work. I’m suddenly brought back to reality when I look further into the workshop and see a large band saw where, beneath as sign that tells you without any subtlety, ATTENZIONE ALLE MANI! – watch your hands in any language – a worker is cutting a fine curve in a piece of wood without any guard on the blade. I shiver at the thought that there’s someone could easily lose one of his mani if he doesn’t pay enough attenzione. 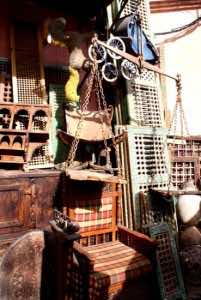 vans long enough ahead in time to get out of the way and let them pass. It’s not the same with the donkeys and carts, though. The carts usually have rubber tyres, although nine times out of ten, worn down to the webbing, and the donkeys don’t exactly make the coconut clacking sound of horses galloping, given their docility and sedate pace. The first thing you know that you are stopping someone in pursuance of their livelihood is when you hear someone shouting, “Balek, balek,” which means, “Make way, make way,” but is usually said in a tone that more realistically says, “Oi, you, shift your arse!”

More by chance than design, I find myself back at the door through which I entered the souk. No, I didn’t find my Brooks saddle, but there again, I have refrained from being tempted by any of its multitude of offerings. Still, there is always next Thursday at Bab el Khermis.

This article was first published at Spain uncovered