Fleeing the gloom of northern Europe in search of warm winter waves, surfers are flocking to a fishing village on Morocco’s Atlantic coast now selling itself as a top surf destination.

It may be a world away from Australia’s Gold Coast, or Hawaii’s Waimea Bay.

But with enough wind, the ocean breakers at Taghazout swell to four or five meters (13 to 16 feet) and are usually at least 300 meters long, making it the Maghreb country’s best surf spot, according to Moroccan pro Boukel Simo.

Morocco’s first “surf festival”, held at Taghazout in late December, caught the attention in particular of board riders fed up with the ice and cold of the northern hemisphere winter.

“Surfers arrived from all over, mostly Europe,” said Mohammed, who repairs surfboards in Taghazout.

“The conditions in December are perfect: winter waves and sunshine.”

Add to that the blue skies, mild winter temperatures – the sea averaged 19 degrees Celsius during the three-day festival – and an international airport at nearby Agadir, there is plenty about Taghazout to impress sun-deprived surfers.

Tom, a seasoned German surfer in his 30s, drew a favorable comparison between California and Morocco’s southwest coast.

“Smaller waves, but a better climate than San Diego!”

Phil, a New Zealander living in London, who like his Finnish friend Antton had flown out for the festival, was sold on Morocco’s surf.

Less than five hours by plane from northern Europe, the only alternative is the Canary Islands, he explained, “and that’s more expensive.”
“In Europe it’s cold and dark at the moment,” he added.

The Cecille family, from La Rochelle on France’s Atlantic coast, arrived in Agadir, but not with the intention of spending their holiday in Morocco’s top beach resort. They headed immediately for Taghazout.

The village is already a victim of its own success, however, with some visitors complaining of crowded waters during peak season.

“Avoid the Christmas holidays… The whole of Europe is out there,” wrote one contributor on the website allosurf.net.

The village now hosts numerous “surf camps,” touted by travel agencies, and offering accommodation and courses in a water sport that has flourished since the 1990s.

Surfboards lie alongside fishing boats pulled up on the wide sandy beach at Taghazout, where the tourism trade has provided work for locals like Omar, an instructor who works at the surf camps.

The high season runs until April.

“After that, there aren’t many people here,” said Xavier Frederic, a Frenchman who has run a pizzeria in the village since 2005, and whose 20 tables were fully booked for the duration of the festival.

The event’s organizer, Mehdi Ouhabbi, is seizing the opportunity to clean up Taghazout’s beaches and raise concerns about the environment.

“In one day, we filled more than 200 bags of litter that we found on the beach,” he said, pointing to a pile of rubbish nearby, beneath which a trickle of waste water from the village flowed directly out onto the sandy shore.

“Running water arrived here three years ago, but there are no plans for water treatment facilities,” with the local authorities citing a lack of funds, Ouhabbi said.

The waste water “smells bad and it makes the surfers’ eyes sting,” he said.

Ouhabbi admitted there was little hope the village would retain its laid-back surfers’ paradise character, pointing to plans for a vast hotel and golf complex in the area.

A “surfers’ village” is also envisaged, with the government stressing that it wants to develop “sustainable tourism.”

“At the beginning it was just a few hippies,” said Marco, a Frenchman who has lived in the area for 25 years. “But it could become big business, a new Cote d’Azur,” he added. 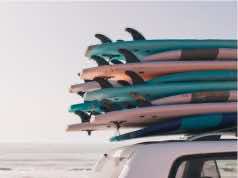 In Photos: Why You Should Go Surfing in Morocco