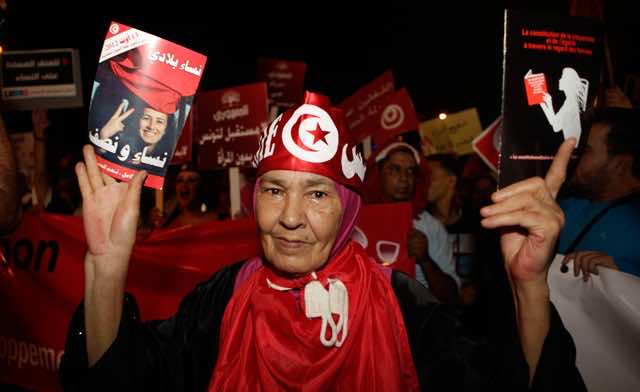 A United Nations working group on discrimination against women on Friday expressed fears for the future of women’s rights in Tunisia, urging the Islamist-led government to guarantee equality of the sexes.

“Part of the climate of insecurity we mention in our mission statement comes from a sense of fear that we’ve been hearing from many women — of losing the protection and the guarantees that they’ve had so far,” working group member Kamala Chandrakirana told reporters.

A draft constitution currently being drawn up refers to equality, but the UN “remains concerned at the persistence of loopholes and ambiguities which, if not removed, might undermine the protection of women’s rights and the principle of gender equality,” a statement said.

“The working group insists on the need for stronger constitutional provisions on gender equality and non-discrimination,” it added.

It notes that outlawing discrimination on the basis of sex is not specifically addressed in the new constitution, and recommends setting up “a specialised constitutional authority on gender equality.”

The working group also calls for a law regulating equality in political life.

“The gender balance in the decision-making process is a very important issue, and this is the reason why we have suggested to introduce the parity in the Constitution,” said Eleonora Zielinska, another working group member.

The Islamist Ennahda party that heads the government sparked widespread protests last August when it proposed that an article in the new constitution refer to “complementarity” between the sexes, rather than equality.

The idea was dropped the following month.

Non-government organisations in the north African nation that gave birth to the Arab Spring in 2010 and 2011 often express fears for the future of women’s rights, accusing Ennahda of orchestrating rampant Islamisation.

Tunisians have since 1956 enjoyed legally backed equality of the sexes in several domains, a unique right in the Arab world. But they are still discriminated against in several areas, particularly in inheritance cases.