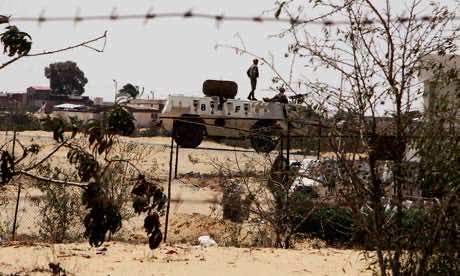 An Egyptian police officer and six recruits were wounded on Friday when gunmen attacked their patrol in the Sinai
Peninsula, security officials said.

The patrol had been tasked with protecting the cross-Sinai pipeline that supplies Egyptian gas to Israel and Jordan and which has been the target of 15 separate attacks since 2011.

Unidentified gunmen opened fire on the patrol in the Ouja region, hitting the seven men, all of whom were taken to hospital in El-Arish.

Sinai, a sparsely populated peninsula home to both lucrative tourist resorts in the south and shadowy Islamist militants in the north, is also a major transit point for arms smuggling to the Islamist-ruled Gaza Strip.

Since the fall in February 2011 of veteran strongman Hosni Mubarak, the peninsula has been swept be security problems, including regular attacks by radical groups on the police and army.

The army launched a major crackdown in the region in early August last year after 16 Egyptian border guards were killed in a militant assault.