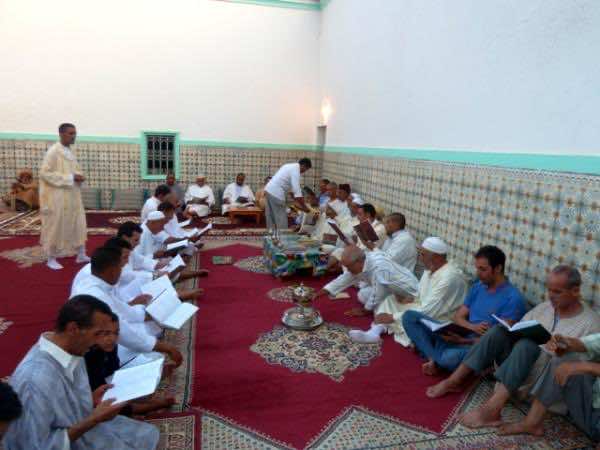 Growing up in Tameslouht, Morocco, 20 km outside of Marrakech, is a history lesson. We’re surrounded by the tombs of saints and the crumbling walls of old religious buildings. The ancient Zaouia, or religious school, probably serves as the best teacher. This 500 year old building sits in the middle of the city and is used as a home and community gathering space to this day.

The Taiefa Jazouliya is one of many groups that work to keep Tameslouht’s history alive. This is a religious association that derives its goals of religious education, celebration of Islamic culture, and emphasis on religious coexistence from the ancient zaouia’s own philosophy. It is a conglomerate of three smaller associations that approach these goals most notably through what we call religious parties. The members gather in private houses or public spaces and sing traditional songs about the Prophet. Most of the time, a reading from the Quran or a story about the Prophet’s life is shared and discussed as well. These religious parties are hosted for a myriad of reasons, including the celebration of religious and civic holidays, new babies, marriages, new jobs, and other personal celebrations. 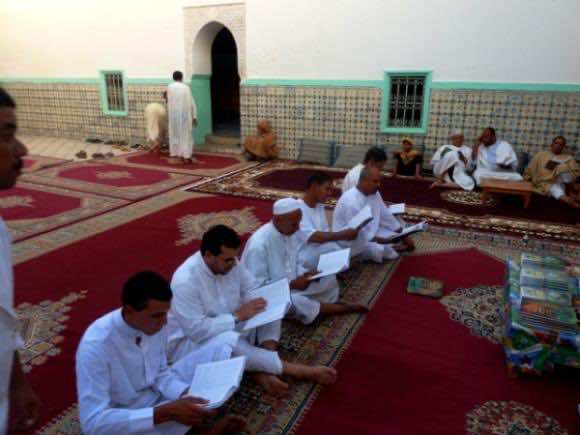 With one foot firmly rooted in our past and one moving towards the future, we’re always looking for new ways to achieve our goals. A dream of mine has always been an interfaith dialogue between the three religions with deep roots in Morocco’s history— Islam, Judaism, and Christianity. I joined forces with a local United States Peace Corps volunteer, and together we have reached out to the Jewish communities of Marrakech and Essaouria, the Catholic community of Marrakech and the Diocese of Rabat.

With Mr. Jacky Kadoch, the President of the aforementioned Jewish communities, Fr. Yosi Solivar of the Franciscan Order, Sarah Quinn, a Peace Corps volunteer, and myself, we have turned an idea into a reality. Extensive project planning and grant writing marked the beginning of our venture. The financial support of World Connect and Dar America, as well as the expressed support of the governor of the El Haouz province, Mr. Younes El Bathaoui, and the President of the Region, Ahmed Touizi, will all assist in making our idea come to fruition in March 2013. 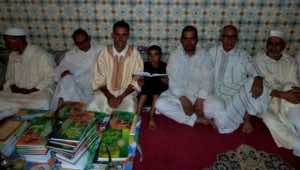 The forum will bring together members and leaders of the Jewish, Christian, and Muslim communities of Morocco. A panel of 6 total university professors, religious leaders representing Islam, Christianity and Judaism, along with representatives from the Islamic Affairs ministry will be present for discussion and debate. Topics addressed will include the history of these religions in Morocco, the relationships between them, and how their respective belief systems manifest in contemporary Moroccan and global society.

The end of the forum will be dedicated to assembling a committee of interested attendees who will work towards the development of a permanent multi-religious association. This association will work on future projects and forums to further the goal of disseminating accurate information of these three religions in Morocco. It will function as a resource for individuals and groups wishing to develop a better understanding of the impact of religion within Morocco. Additionally, this new association will serve as Morocco’s chapter of the international World Faith Organization, which promotes interfaith discourse and action worldwide.

This event will be marketed towards university students especially, as this 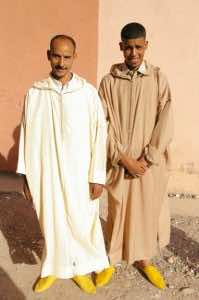 demographic is poised to benefit the most from such an event; the majority will be entering the global workforce and community as representatives of Morocco, thus shaping the future of Morocco most substantially. University students will be encouraged to participate in the publicity of the event, the forum, and the subsequent development of the association. Half of the eight-member committee will be comprised of university students, as will the association board for the newly formed association.

Through this forum, an open dialogue about religion will be established and sustained in the community of Tameslouht, in Morocco, and potentially serve as a catalyst for worldwide discussion and action.

This is our Facebook page To receive updates and information about our event. We look forward to seeing you there!