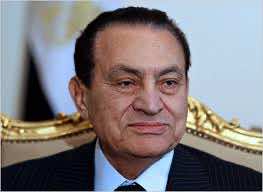 Egypt’s Hosni Mubarak, whose appeal against a life sentence for involvement in the deaths of protesters was accepted Sunday and who now wins a retrial, enjoyed near absolute power for three decades.

The 84-year-old’s spectacular fall from grace in a popular revolt sent shock waves across the Middle East and beyond when he announced his resignation on February 11, 2011 after an 18-day popular revolt.

The spectacle of the man who had dominated Egypt for so long appearing in the dock on a stretcher during his trial gripped the nation.

He was convicted for his role in the deaths of more than 800 protesters during the revolt and could have received the death penalty when the court handed down sentence on June 2, 2012.

In the event, he escaped the gallows and to the fury of many Egyptians, nearly all his lieutenants escaped conviction.

But Mubarak’s two sons Alaa and Gamal – long regarded as his heir-apparent – both remain in custody in the face of multiple corruption cases.

Until anti-government protests erupted on January 25, 2011 Mubarak had seemed untouchable as president of the most populous nation in the Arab world, backed by the United States and the military, from whose ranks he had emerged.

He had survived 10 attempts on his life, most of them by Islamist militants, but in the end, it was the people who brought down Egypt’s latter-day pharaoh.

It was a blow he found hard to accept.

Two months after his overthrow, Mubarak told pan-Arab satellite channel Al-Arabiya that he and his family were the victims of “false claims that seek to ruin my reputation and challenge my integrity.”

After his life sentence his health collapsed and the state news agency even reported him clinically dead at one point as he slipped into a coma.

He recovered but was reportedly deeply depressed by the election of Mohamed Morsi, the candidate of his long-time foe the Muslim Brotherhood, as president later the same month.

Mubarak himself rose to power unexpectedly, when then president Anwar Sadat, who made history by signing a peace deal with Israel, was gunned down by Islamist militants on October 6, 1981 at a military parade.

He took office a week later and ruled without interruption until his overthrow.

Islamist militant groups were responsible for most of the attempts to kill Mubarak, including a failed bid to fire rockets at his plush Cairo residence and a plot to car-bomb the presidential motorcade.

In 1995, militants opened fire on the presidential motorcade in Addis Ababa.

With his jet black hair and aquiline nose, Mubarak had a reputation for vigour and was once known to play squash almost daily.

But that image suffered in 2003 when he fainted while addressing parliament.

In 2004, he underwent surgery in Germany for a slipped disc, and he returned to Germany in March 2010 for the removal of his gall bladder and a growth on the small intestine.

Mubarak, whose widow Suzanne is half Welsh, kept his private life a carefully guarded secret.

He was born on May 4, 1928 in the Nile Delta village of Menufiyah and rose through the ranks of the air force, fighting in repeated wars with Israel, before supporting Sadat in pursuing peace with the Jewish state in 1979.

In office, he maintained the unpopular policy of peace with Israel and accommodation with the West that cost Sadat his life.

But he never followed in his predecessor’s footsteps to Jerusalem, to the abiding criticism of the Israeli right.

Mubarak’s government was the frequent target of domestic opposition – ranging from the Muslim Brotherhood to secular and liberal dissidents – and his opponents were often jailed.

His regime mercilessly crushed militant groups, which carried out attacks in the 1980s, 1990s and, more recently, in 2004 and 2006, when tourist resorts were targeted.

Mubarak’s ties with the United States and Israel drew criticism from across the region, especially during the 2006 Israeli war in Lebanon and Israel’s Gaza offensive in 2008-2009.

When the uprising erupted Washington deserted him – belatedly in the view of many Egyptians – and it was only the Gulf Arab states that backed him to the end.