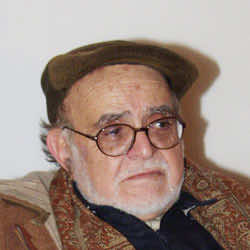 King Mohammed VI paid tribute to the late Moroccan playwright and lyrics writer Ahmed Tayeb El Alj on the 40th day of his passing away.

In a message read out by spokesman of the Royal Palace, Abdelhak Lamrini at a ceremony held on Saturday in the Mohammed V national theater, the sovereign expressed “deep emotion” at the passing away of an “emblematic figure” of Morocco’s cultural scene, and paid tribute to the late artist’s “multiple and various talents” and to his contributions, since the dawn of independence to the artistic and dramatic revival and to the construction of Morocco’s cultural personality.

The sovereign also lauded the late artist who was a self-made man who loved his country and put his art at the service of Morocco’s national liberation movement, “at a time when art, in all its expressions, mainly literary and popular poetry, singing, drama and show, was among the major means of struggling for freedom and independence and for expressing Moroccans’ attachment to their authentic identity.

Morocco has lost an outstanding monument in the fields of drama, literary and popular poetry, research in folk arts, quotations and proverbs and an integrated school that taught successive generations of artists an authentic and original knowledge, says the Royal message.

After stressing the interest granted to art and culture and the will to promote the situation of artists, the sovereign says this commemoration is an occasion to express to artists “esteem and recognition” for their efforts to promote Moroccan culture and arts.

The Royal message also called the young artists to follow the path of pioneers and bring active contribution to their country’s development.

The ceremony was chaired by Princess Lalla Hasnaa.