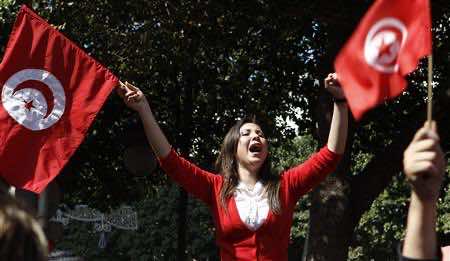 Tunisians marked the second anniversary on Monday of veteran dictator Zine El Abidine Ben Ali’s flight into exile in the first of the Arab Spring uprisings but insecurity and social tensions persist.

A deadlock over a new constitution and the growing influence of radical Islamists are further challenges facing the nation since Ben Ali fled to Saudi Arabia.

President Moncef Marzouki will kick off the celebrations at 0700 GMT by hoisting the national flag over Kasbah Square in Tunis, near the headquarters of the ruling coalition led by the Islamist Ennahda party.

Later the government will seal a “social pact” with trade union leaders and business executives at the National Constituent Assembly, in a bid to boost a sluggish economy.

Frustration at the government’s failure to address poverty and rising unemployment has mounted since the revolution, with the country rocked by repeated protests, some of them deadly.

On Sunday, the army deployed in the southern border town of Ben Guerdane after a week of clashes between police and residents demanding development projects to revive the area’s local economy and reduce unemployment.

A festive mood nevertheless swept over Tunis where street concerts and cultural events were held throughout the weekend along central Habib Bourguiba Avenue, cradle of the 2010-2011 revolution.

Supporters and opponents of the government, as well as Islamist and liberal forces, were planning to march side by side on Monday to mark the anniversary.

“In a few hours we will know if all these different factions of Tunisians can co-exist… It is a real test of democracy that will take place tomorrow in the heart of the capital,” Le Quotidien newspaper said on Sunday.

The interior ministry has urged everyone to respect the peace but said it was taking “necessary precautions” should violence break out.

Security forces fear that radical Islamist factions could seize the occasion to carry out attacks — particularly since jihadists have been linked to a wave of unrest since the revolution.

Representatives of both Libya and Egypt, two other Arab Spring states, will attend Monday’s ceremony, that will be capped by a meeting of the National Constituent Assembly which is deadlocked on a new constitution.