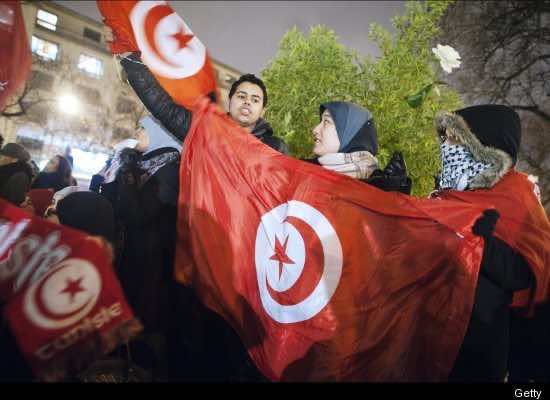 Tunisians on Monday marked two years since the flight into exile of veteran dictator Zine El Abidine Ben Ali amid a climate of uncertainty marked by social tension, a weak economy, threats from jihadists and a political impasse.

The three men, who represent the ruling coalition headed by the Islamist party Ennahda, gathered at the Kasbah, next to the government’s headquarters, for the brief ceremony, which was attended by the leaders of the main political parties.

With unemployment considered a driving factor behind the revolution, and with Tunisia still rocked by repeated protests over poor living conditions, some of them deadly, the signing of the accord was loaded with symbolic importance.

In the city centre, political activists prepared to march down Habib Bourguiba Avenue, the epicentre of the mass uprising that toppled Ben Ali on January 14, 2011 and touched off the Arab Spring.

The demonstrators included supporters and critics of the government, among them hundreds of members of the secular opposition parties and Islamists, and there was a heavy police presence.

Frustration at the government’s failure to address poverty and rising unemployment has mounted since the revolution.

On Sunday, the army deployed in the southern border town of Ben Guerdane after a week of clashes between police and residents demanding development projects to revive the area’s local economy and reduce unemployment.

And the mausoleum in Sidi Bou Said, a prime Tunisian tourism destination, was ravaged by fire at the weekend in a suspected arson attack.

Several shrines dedicated to Muslim saints have been torched or looted in recent months in Tunisia, in acts blamed on hardline Salafists.

Speaking in parliament after the signing ceremony, Jebali, from the ruling Ennahda party, promised to “redouble efforts” to forge a national consensus, and spoke of his desire to enlarge the ruling coalition to overcome the political divisions plaguing the country.

Parliamentary speaker Ben Jaafar, who has strongly criticised the deadlock over the drafting of the new constitution, pledged that the future text would guarantee the goals of the revolution, “establishing a democratic state and the rotation of power”.

But reflecting the failure to reach a consensus so far, no electoral calendar has been drawn up, with the government hoping to hold elections in the summer or autumn of 2013.

“We want to bring all the Tunisian people together, through united political forces capable of dialogue, to agree on a calendar for the big political events, particularly the date of the elections,” he told AFP.

“It is the (Tunisian) flag, which represents everyone. But some want to replace it with another, the black flag (of the Salafists). The people must remain vigilant because there is a threat, as we have seen in Sidi Bou Said,” he told AFP.