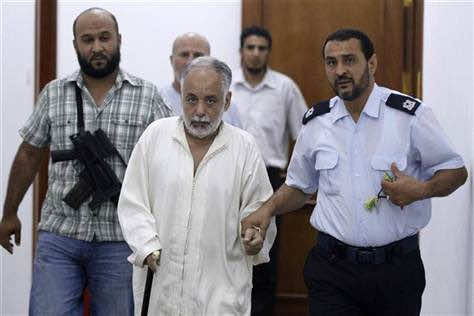 Defence lawyers had asked for the delay to allow time to summon witnesses and the judge demanded that all witnesses testify in a single hearing.

“We have two witnesses in custody, Mohamed Abubakar Dhib and Abdelati al-Obeidi, who have been informed by the prosecution. We have other witnesses outside that we could not inform in time,” a defence lawyer said.

Dhib was a deputy premier and Obeidi a foreign minister during Kadhafi’s rule.

Along with Seif al-Islam, the toppled dictator’s most prominent son, Mahmudi is one of the few remaining keepers of the many state secrets of Kadhafi’s regime.

A doctor by training, Mahmudi was loyal to Kadhafi until the end, serving as premier from 2006 up to the final days of his regime, while also overseeing vast fortunes in the oil-rich nation.

Mahmudi fled to neighbouring Tunisia in September 2011 shortly after rebels seized Tripoli and effectively put an end to more than four decades of iron-fisted Kadhafi rule.

He was extradited to Libya on June 24 last year, despite warnings from human rights groups that he could face the death penalty, and has protested his innocence to journalists visiting his prison.

On Monday, he appeared in the dock, dressed in traditional Libyan costume.

He was flanked by two co-defendants, Al-Mabruk Zahmul and Amer Salah Tirfas, who managed a trade and investment company run by Seif al-Islam.

The three are accused of “abusing public funds” and committing acts aiming to “unjustly kill people” during the 2011 uprising that led to Kadhafi’s ouster and death.

They allegedly funnelled 19 million euros ($25 million) to private accounts in Tunisia, and used it for logistical support to loyalist forces as they sought to crush the anti-Kadhafi revolt.

Zahmul’s lawyer presented four witnesses on Monday, including a former officer under Kadhafi.

Monday’s testimony sought to establish whether Zahmul, in charge of marketing at a state oil company, Brega Petroleum Marketing Company (BPMC), ordered the supply of oil and gas to pro-Kadhafi units during the war.

His defence sought to prove he made no direct orders to that effect.