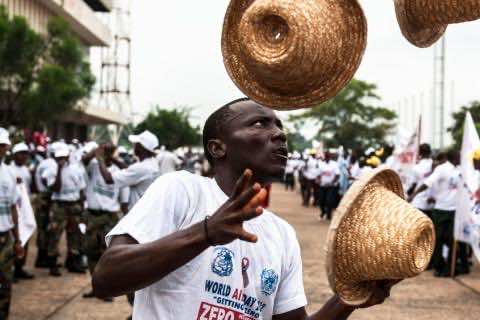 Africa is pulling out all the stops in its race to curb the AIDS pandemic by 2015, a deadline set by UN member states. From making anti-retroviral drug therapy (ART) readily available to the masses, to increasing consistent, correct condom use and voluntary medical male circumcision, everything has been tried and tested. And these efforts are paying off, according to the latest report of the Joint UN Programme on HIV/AIDS (UNAIDS).

Africa has cut AIDS-related deaths by one third in the past six years, the report says. Even countries with the highest HIV prevalence in the world have seen the number of new HIV infections decline dramatically.

Malawi has witnessed a 73 per cent drop in new HIV infections. Botswana, Namibia, Zambia and Zimbabwe follow. South Africa managed to reduce new infections by 41 per cent. Even Swaziland — the country with the highest HIV prevalence in the world — saw new HIV infections drop by 37 per cent. Meanwhile, in other regions of Africa, Ghana topped the list, followed by Burkina Faso and Djibouti.

Leaders in Africa have been funnelling money into their national AIDS programmes. Last year alone, South Africa invested $1.9 billion from public sources for its national AIDS response. Kenya doubled its domestic investments for AIDS between 2008 and 2010, and Togo did the same between 2007 and 2010.  International assistance has also been stable, with 26 of 33 countries in sub-Saharan Africa relying on donor support for their domestic programmes, Results adds.

The scaled-up response has been most effective in boosting the number of people on ART treatment and reducing the number of children born with HIV. Six African countries (Burundi, Kenya, Namibia, South Africa, Togo and Zambia) saw a 40 per cent reduction in the number of children newly infected by the virus between 2009 and 2011. “It is becoming evident that achieving zero new HIV infections in children is possible,” says Michel Sidibé, the UNAIDS executive director. “I am excited that far fewer babies are being born with HIV. We are moving from despair to hope.”

On the other hand, North Africa has not fared so well. The number of people newly infected with HIV each year has risen since 2001, although overall numbers are still relatively low.

On 1 December, World AIDS Day, Mr. Sidibé called on the world to renew its commitment to zero new infections, zero discrimination and zero AIDS-related deaths. At a UN high-level meeting on AIDS in New York in 2011, global leaders agreed to meet the ambitious targets of significantly reducing the sexual transmission of HIV, virtually eliminate mother-to-child HIV transmission and achieve universal access to treatment by 2015. Mr. Sidibé believes that with “political will and follow through,” the world can reach those shared goals.

ONE, a global advocacy group fighting poverty and preventable diseases, begs to differ. The world is not on track to achieve the global AIDS targets, the organization asserts.

In its latest progress report, The Beginning of the End of AIDS? Tracking Global Commitments on AIDS, ONE remarks that anti-retroviral treatment for HIV-positive individuals has been the hallmark of the world’s response to the AIDS pandemic. But, the group warns, only 6.6 million of the 15 million who need the treatment have access to it, and 2.5 million continue to be newly infected every year.

According to the South African advocacy group Section27, such figures prove that the “end of the epidemic is no where near.” Section27 Director Mark Heywood challenges the “rosy picture” painted by UNAIDS. He argues that the “remarkable” gains of recent years have yet to be consolidated and entrenched, notes that people living with HIV/AIDS still need to secure their rights and warns that the global economic recession could redirect money away from AIDS.

UNAIDS maintains that high-income countries have continued to help even as they faced persistent economic problems. The agency admits though that international assistance is still a crucial lifeline for many low income countries.

The Global Fund to Fight AIDS, Tuberculosis and Malaria, an international grant-making institution, has been instrumental in attracting funds for national programmes. It is currently preparing for its 2013 replenishment meeting. It has already received a donation of $200 million from RED (a division of the ONE campaign) to fight the AIDS epidemic in Africa.

Meanwhile, the President’s Emergency Plan for AIDS Relief (PEPFAR), a US government initiative and the largest funder of HIV efforts worldwide, has announced that its future focus will be on prevention, women and girls, as well as on reaching the most at-risk populations.

Moving forward, experts and policy makers agree that keeping people on treatment is as important as getting them the drugs. UNAIDS warns that adherence to these HIV treatment programmes can fall as people regain better health. The agency cites the example of a treatment centre in Malawi where nearly half the people who began ART are no longer in care five years later.

HIV treatment is for life, UNAIDS emphasizes, and people living with the virus need to take pills every day. It urges African countries to incorporate community support strategies to complement clinical services and to keep down programme management costs and drug prices. Basically, more people need access to treatment to live longer and more productive lives.