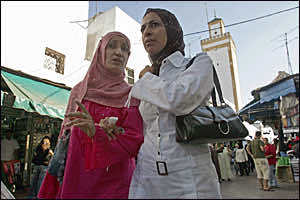 The second part of this article will mainly deal with Moroccan proverbs that deal with women issues. The proverbs are organised under different labels so as to be able to distinguish between the positive and negative ones.

This proverb shows how women try to please men but still they are seen as inferior. Women try always to make men feel comfortable but they are usually badly rewarded.

The proverb means that it is shameful to keep single women at home. This is mainly because the Moroccan society sees that the place of women is in their husband’s house. Sociolinguistically speaking Moroccans tend to use the word ‘a’teq’ to treat single young women. This word has a negative connotation within certain communities.

Women should always submit to men’s power. The proverb says that the faithful woman is the one who eats from the hand of her husband. Therefore, women should be limited and secluded in a specific atmosphere dictated by society.

Women in our society are seen as weak species. This proverb questions the ability of an old woman to catch a thief. Old women are called in the Moroccan society as a’gouza and this has a negative meaning since it is loaded with bad connotations.

2. “llahoumma bekhousha we tweness wala yaqouta we tehewess”/I would rather be with an insect to keep my company than a gorgeous woman that will bother me.

The proverb says that it will be better for a man to marry a weak woman rather than a beautiful and powerful one. The weak woman is referred to as ‘bekhousha’ which is a weak insect. Women have different names in our Moroccan society that range from positive to negative ones.

Women in this proverb are compared to a donkey. As far as language in society is concerned ‘hmara’ mainly refers to stupidity. Nevertheless, some people claim that this proverb is a positive one since it sees that women bring joy within their family even if they are stupid.

1. “dreb hlima heta teboul li ferasha mayzoul”/even if you beat hlima till she urinates, she will never forget what she has in her mind.

The proverb says that even if you beat a woman hardly she will never resit. This shows the ill nature of women. Women here are referred to by the proper name ‘hlima.’

2. “llah yenejjik men lmechetaq ila faq we men lbayra ila derbat ssedaq“/may god save you from a person who yearns for something and from a single woman who is getting married.

In this proverb we have another kind of women (single old ones) that are incapable of giving birth. They are referred to as ‘bayra’. It has also a negative meaning since the proverb warns people from this kind of women especially when they have the opportunity to get engaged.

The proverb claims that women are responsible for breaking relationships.

The proverb shows the ill nature of the step-mother.

The only cure for ‘lhejala’, who is a woman that is divorced, is men. Here women are seen as a sex object since they can not live without the presence of a masculine authority.

Women here are compared to chicken. They are seen as a species that are born to give children.

3. “Mera bela rajl a’esh bela bertal”/a woman without man is like a nest without a bird.

Women who do not have men in their lives are like a bird with no nest. Women can not live without men.

The proverb says that an ugly woman does not have to ask for a beautiful man. Nevertheless, we can have the contrary in our society. In this proverb the woman is referred to by ‘a’wejet rrejline.’

Everybody judges what he has as the best of all. One’s child is always the most beautiful and the most intelligent. One does not like the others to criticize or underestimate one’s children. Every mother sees her offspring as beautiful though in the others’ eyes it is not.

The proverb says that if men are not capable of solving some problems, women can do it.

The proverb says that if women can not be stars in the sky they can be candles in their house.

This proverb gives a good value to women. It depicts them as being the ones who bring love, happiness, and peace within their family.

The proverb shows that beauty is inherent in families.

1. “Dirha ferrjal we nesaha we dirha fe nessa we terjjaha“/do something bad to men and forget it, do the same to women and hope nothing will happen.

The proverb says that if a person does something bad to men they can forget about it.  However, if they do it to women they will pay for it sooner or later.

In this proverb women are compared to Satan. This mainly says that they may be devilish.

The proverb says that women are one of the major causes for breaking relationships.

Women are treated badly in Moroccan proverbs. According to the proverbs women have limited functions. They are either mothers, step mothers, mothers in law, wives, daughters in law, widows, or prostitutes. As it has been shown before, people within a society can determine the status of others. In our case women are either talkative, ugly, shrewd, sex objects, weak, inferior to men, or ill-natured.

The language that is used in proverbs in order to refer to women is mainly conventional within the Moroccan society. People created different names to refer to women. These words were used in proverbs and combined with other words in order to explain a state of mind. In addition, the language that is used show that women are static. They are either a’gouza, bayra, a’roussa and other ones. Women are generally thought of to be kind, soft and a symbol of tenderness. Therefore, the language of the majority of proverbs shows them as creatures that need to be treated like animals or as a dangerous gender since they have a devilish side.

Society can shape a certain view by using a specific diction. Language is very important within society. It has many hidden effects and contributes in enhancing moral values within a certain community. Most of people argued that the language of proverbs favours men rather than women. As far as the age and gender variables are concerned, people from all ages and especially women see that the language of proverbs came to make women inferior to men.

Lot of researchers tried to see if language in general is sexist or not. Therefore, tentative replies to this question showed that one can not claim that language is sexist, but rather it is the people who are sexist as these differences do not stem from the language but from the mentality of the people who speak it. People are the ones who shape language according to their values, beliefs, norms and traditions.

In a society like Morocco we can say that we have a lot of stereotypical images about women. These images can be seen as the major factor that makes of a language a sexist one. Moroccan Arabic (darija) is full of words that have bad connotations about women. Most of the proverbs that were studied showed that there are sexist expressions that are used to refer badly to women. This pushes us to say that the linguistic distinction between the sexes is much more cultural than linguistic. Men and women are given different roles in the Moroccan society and this is clearly reflected in the language of proverbs.

In order to free a language from stereotypical images one should first identify an area in which they are mostly used. Proverbs are one of the areas that can serve this purpose. Since they are part of the cultural heritage of societies it would be hard to fight them. However, the best solution would be to sensitise people about the importance of reducing sexist language from their speech. One can also target the educational system by designing text books that reinforce non-sexist language. This can be very successful since it could be transmitted from one generation to the other. Furthermore, media can play a great role in doing so and this by making people aware of the harm that they can cause to each other.

Meryem Fati is currently a doctoral student at the Faculty of Education, Mohammed V- souissi- Rabat, Morocco. She is working on cross- cultural communication. She was a Fulbright scholar and affiliate at Kansas University. She is a language and communication instructor at Mohamed V university- Agdal- Rabat, Morocco. She participated in Moroccan and international conferences and she served as a co- translator of Khadija: the First Muslim and the Wife of the Prophet Muhammad By Resit Haylamaz..