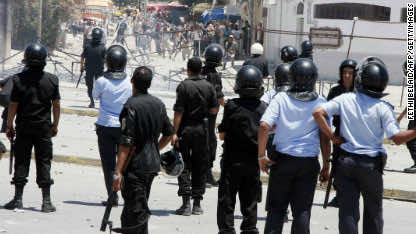 A Tunisian court has handed one-month jail terms to 16 people implicated in violence last June linked to an art exhibit that was deemed offensive to Islam, official media reported on Wednesday.

The defendants were convicted of violating the state of emergency, but were acquitted from the more serious charges, which included rebellion, assaulting public officials and attacks on public order by organised gangs, the TAP news agency quoted their lawyer Salaheddine Barakati as saying.

Barakati added that several of his clients planned to file complaints against the state for holding them in preventative detention until November, when they were freed after a hunger strike by hardline Salafists in which two people died.

At the end of December, four Tunisians being tried on the same charges were acquitted and three others sentenced to six months in prison, lawyer Abdelbasset Ben Mbarek told AFP.

In June, Salafists destroyed works of art exhibited in a chic suburb of Tunis which they considered “blasphemous.”

The incident sparked clashes across the country that saw police stations and political party offices torched, in some of the worst violence since the January 2011 revolution that toppled president Zine El Abidine Ben Ali.

Tunisia’s radical Islamist movement has carried out a wave of attacks in the past year, including on cultural festivals and Sufi shrines.

And in September, they attacked the US embassy in Tunis in a day of, violence that left four people dead.