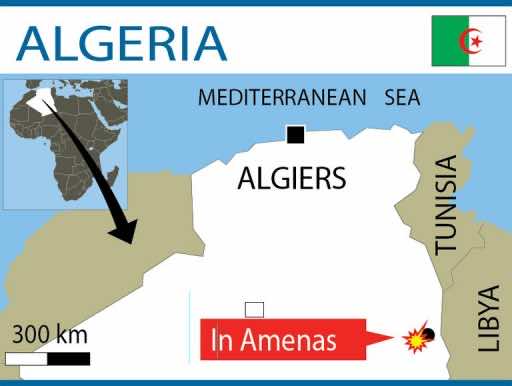 The hostage crisis at the In Amenas gas field has dragged Algeria into the Mali conflict despite its opposition to military intervention, with the kidnapping of foreigners coming on the heels of its decision to give logistical support to France.

The Algerian authorities for a long time insisted on a political solution to the turmoil in Mali, but finally allowed overflights by French fighter planes to support a ground offensive aimed at ousting Islamists in the country’s north.

The deadly dawn attack on Wednesday, in which Al-Qaeda-linked Islamists claimed to have seized 41 foreigners, many of them Western, took place at a major gas plant in southeastern Algeria operated by British oil giant BP, Norway’s Statoil and Algeria’s Sonatrach.

On Thursday, local media said 15 foreigners and 30 Algerians being held hostage managed to escape from their kidnappers, who are surrounded by Algerian troops.

“This attack is not just a warning to the Western countries but also to Algeria, which opened its airspace to French army planes,” said Chafik Mesbah, former officer in the Algerian army, in an interview with local daily Echorouk.

“It is a heavy blow for Algeria… The goal could be to draw it into the war that France is waging in Mali,” said the French-language daily Liberty.

“It could be signalling the start of reprisals against Algeria, after the authorisation of flights over its territory by French Rafale fighter-jets and the setting in motion of the military operation in northern Mali,” it added.

The gunmen say the attack is in retaliation for Algeria’s support for French airstrikes and for its tough line on jihadists, calling for the release of radical Islamists being held in neighbouring Mali.

“This operation is a strong political message to Algeria regarding its intransigent stances towards the jihadists, and a message to other neighbouring countries,” one of the kidnappers, identified as Abu al-Baraa, told Al-Jazeera satellite channel.

“Our detainees for theirs,” he said, adding that his group has “contacted our leadership in Mali.”

“We demand the Algerian army pull out from the area to allow negotiations to begin,” Abu al-Baraa told the Doha-based satellite channel, speaking with a strong Algerian accent.

A Briton, a Japanese and an Irishman, identified as being among the hostages, took turns speaking on Al-Jazeera to demand the withdrawal of Algerian troops from the site.

Algerian Interior Minister Dahou Ould Kablia insisted Wednesday that Algiers would not negotiate with the “terrorists,” after announcing the initial attack on a bus carrying engineers to the airport, in which two people, including a Briton, were killed.

Six people were also wounded in the attack, including another two Britons, a Norwegian as well as an Algerian security agent and two policemen.

Abu al-Baraa told Al-Jazeera that Algerian snipers had opened fire at the site where the hostages were being held, injuring a Japanese national.

A group calling itself the “Signatories for Blood” claimed responsibility for the kidnapping in a statement published by Mauritanian website Alakhbar.

The group is led by veteran Islamist fighter Mokhtar Belmokhtar, a former leader of Al-Qaeda in the Islamic Maghreb, who was ejected from the group last year and who has been blamed for previous abductions and killings of both Algerians and foreigners.

“Algeria was chosen for this operation to teach (President Abdelaziz) Bouteflika that we will never accept the humiliation of the Algerian people’s honour… by opening Algerian airspace to French planes,” the group said