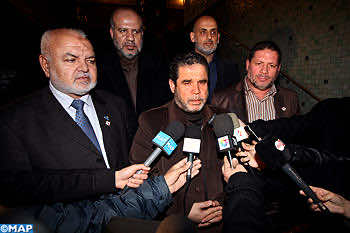 King Mohammed VI, chairman of Al Quds Committee, and the Moroccan people have always been precursors in supporting the Palestinian cause against occupation, representatives of Palestinian movements Fatah and Hamas underlined.

“The sovereign, chairman of Al Quds Committee, the brotherly Moroccan people and Morocco’s political parties have always been precursors in supporting the Palestinian people in fighting Israeli occupation,” said the representatives who were received, on Wednesday at the royal cabinet, by the King’s advisor Abdellatif Menouni.

The Fatah and Hamas movements aspire to an effective implementation of the “Rabat Statement of the Palestinian factions’ meeting in Morocco” which was adopted following the meeting of representatives of the different Palestinian movements, organized in Skhirat.

The Hamas movement voiced the wish that the King sponsors a fund to support the inter-Palestinian reconciliation to remedy dissensions between the different parties in Palestine, Spokesperson of Hamas Salah Bardawil said.

Member of Fatah’s central committee Taoufiq Tiraoui said that his movement hopes that the sovereign succeeds in mobilizing Arab brothers to make sure that the social reconciliation process, as laid in the Rabat statement, is successful.

Several Palestinian factions took part in the meeting of Skhirat, including Fatah, Hamas, the Popular and democratic Fronts, the Islamic Jihad movement and the People’s Party, in addition to other factions and figures.