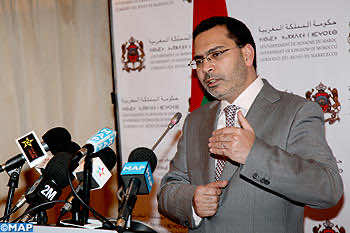 The Moroccan government decided at the monthly conference held this week to establish a mechanism to follow up and monitor the implementation of its programs, said, Thursday in Rabat, Communication Minister and Government Spokesperson, Mustapha El Khalfi.

Speaking at a press conference following a meeting of the Council of Government, the Minister said the government decided at its conference, which will become a monthly meeting, to review the various issues at hand, to establish a mechanism to monitor the implementation of the government programs.

The minister stressed the mobilization of the executive branch to pursue reforms with the aim to meet the expectations of the Moroccan people, adding that several meetings were held recently with unions and investors to activate the government’s action mechanisms.