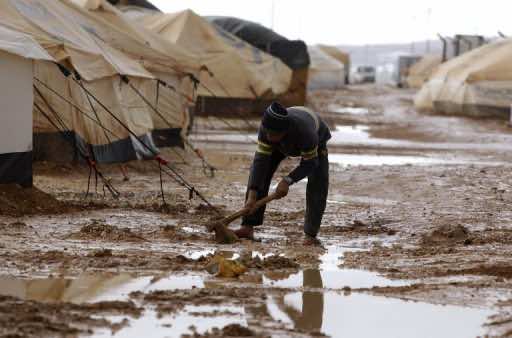 Seven days of heavy rain in Jordan washed away tents in the Za’atari refugee camp last week, affecting 100 families and forcing children to stand in puddles while temperatures reached below zero. This harsh winter weather has made conditions even more difficult for aid workers seeking to help the more than 630,000 refugees fleeing the Syrian crisis.

“Looking at the Syria situation at the moment, we really consider the serious and intense situation as one of the most complex and dangerous operations in the world as of 2013,” said Panos Moumtzis, the United Nations Refugee Agency’s regional refugee coordinator for Syrian refugees.

“It’s complex because it involves five or six countries and very dangerous because of a fear and risk of a regional expansion; a regionalization of the conflict is very real and very high,” Moumtzis said.  The refugee coordinator spoke to a room full of diplomats, journalists and humanitarian workers during an International Peace Institute event in Manhattan on Jan. 17.

The 22-month crisis between Bashar al-Assad’s government and the opposition has left Syria with a constant stream of refugees flowing over the boarders.

As of Jan. 15 the United Nations is reporting Jordan is currently housing 185,244 refugees, Egypt 13,774, Lebanon 206,666, Turkey 154,705, Iraq 72,480 and North Africa 5,417 refugees. So far the influx has not widely disrupted regional politics, but the UN is closely watching the situation, especially in Jordan where elections will be held Jan. 24 and in Lebanon, which is now stable after a 15-year civil war.

According to the United Nations, 78 percent of registered refugees are women and children.  “This is a children’s refugee crisis,” Moumtzis said.  “In this area there are 2.5 million children affected, both inside and outside (Syria).”

Efforts are being made to try and keep displaced students enrolled in some sort of school curriculum, which includes allowing them to attend classes in their host nation.  Aid workers are also encouraging children in camps to play and interact with others in order to help them cope with what they have witnessed.

The humanitarian community is also calling for urgent assistance to keep their operations running.

The humanitarian community has requested $1.5 billion US dollars from donors to help displaced people both inside and out side the country. The money would also help host countries that are accepting refugees.

While aid workers are struggling to help the constant stream of refugees crossing the boarder daily, they know the solution must come from other channels.  “What we would like to see is a political solution,” said Moumtzis.

So far three United Nations Security Council resolutions on Syria have been vetoed by both Russia and China.

April Warren is an international Journalist based in the United Nations. She is Morocco World News Co-editor