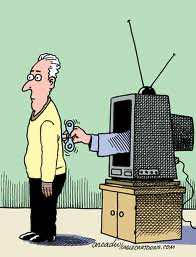 “None are more hopelessly enslaved than those who falsely believe they are free.”[1] Johann Wolfgang von Goethe

Evidently speaking, media nowadays, as Stuart Hall said “have progressively colonized the cultural and ideological sphere.”[2] Hence, “our understanding of the society in which we live is mediated by mass media.”[3] That is to say, much of what we think, the styles we like, the choices we make, the beliefs we hold and the causes we advocate are shaped by media discourse on these matters.

Our freedom, accordingly, is at stake in a media-saturated world because our social knowledge is derived mainly from the different forms of media. What’s strikingly intriguing about media nowadays is its metamorphosis into a lucrative and money-making business par excellence. People now invest more and more in media because they are aware of the financial potentials of this sector. Media do not only grant its owners power by helping them indoctrinate the masses and direct their interests but also help them preserve and maintain this power.

Global media giant corporations nowadays take the form of an octopus taking control of the world; a global commercial media system monopolized by a small number of corporations, mostly US media corporations. It is a system that consistently works to advance the idea of the global market and promote the culture of consumerism and commercial values to concentrate power and wealth at the hands of a minority of people while denigrating other cultural forms and practices which gradually dissolve under the influence of media.

This new condition which is fostered by media is considered a real disaster especially for the superficial notion of democracy- democracy which comes to mean “those who own the world ought to govern it,”[4] to use the words of John Jay. A concrete evidence for this argument is the US presidential elections and the important role that media play in fund-raising for the campaigns and the persuasion of voters. Had he not gained much positive popular media support, Obama would have never become a president of the United State. Indeed, “whoever controls the media controls the mind”[5] as Jim Morrison remarks.