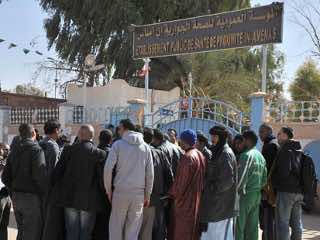 An Algerian man who escaped from Islamists holding foreign hostages at a gas plant in the Sahara desert told AFP on Saturday his captors spoke in different Arabic dialects and also in English.

“I saw five inside the plant, but I don’t know how many others were outside,” said Iba El Haza, a driver at the BP gas plant near the Libyan border, of his Islamist captors.

“From their accents I understood one was Egyptian, one Tunisian, another Algerian and one was speaking English or a foreign language.”

Haza escaped during a rescue attempt launched on Thursday by Algerian special forces which officials say killed 12 hostages and 18 of the Al-Qaeda-linked Islamist captors.

The “Signatories of Blood,” a group led by veteran jihadist commander Mokhtar Belmokhtar, says it still holds several foreigners including Belgians, Americans, one Japanese and a Briton.

“I saw two Filipinos (hostages), another who said he was American and two others who I don’t know what their nationality was. They were close to us,” Haza said.

We decided then to leave… We went straight to the army. We had broken the padlocks (on the door of the room they were held in) and we left,” he said.

He added that his captors were armed with AK-47s, machineguns and rocket-propelled grenades, and that they told him they were interested only in keeping the foreigners hostage.

“The terrorists said: ‘You have nothing to do with this, you are Algerians and Muslims. We won’t keep you, we only want the foreigners’.”

Algerian forces launched their rescue attempt on Thursday, a day after the kidnappers seized the plant to demand an end to French military action against Islamists in neighbouring Mali.

Algiers was slammed internationally for the haste with which it launched the dramatic assault.

An AFP correspondent said five coffins were taken to a hospital in nearby In Amenas on Saturday morning, where the wounded who escaped after the army’s raid were being treated.

Military helicopters were circling the gas plant, inside which the remaining hostages are holed up with their captors, according to a security source.