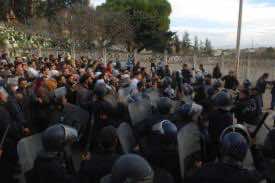 The crisis created by Islamists’ seizure of one of Algeria’s most valuable gas fields and the ruthless response from the army has left its government facing lasting, damaging fallout, analysts say.

The army assault on the gas complex that has left a number of expatriate workers dead and dozens unaccounted for confirmed the Algerian military’s reputation for taking no prisoners in its confrontations with Islamists.

But even if the army ends up slaying every last one of the gunmen, the fact that a group of Libya-based militants was able to enter the country and take over such a heavily-guarded site is a severe blow to the government’s security credentials.

The authoritarian regime in Algiers has long presented itself to the west as a bulwark against “terrorism” in an increasingly unstable region.

And its ability to ensure the safety of foreign businesses and their employees operating in the country is primordial for a government that generates 75 percent of its revenues from the oil and gas sector, which also accounts for nearly half the country’s economic output and almost all of its exports.

The prospect of any fresh investment from Japan, in particular, do not look good in the short-term given the furious reaction in Tokyo to the speed with which the army resorted to force having spurned offers of assistance from British and US special forces.

With 10 Japanese nationals still unaccounted for, Prime Minister Shinzo Abe on Saturday branded the hostage takers “despicable” but Tokyo’s wrath was also focused on the Algerian authorities, whom they accuse of blundering into military action without any consideration of the implications for the lives of the hostages.

Britain, whose oil giant BP partly operates the gas field at the centre of the drama, has also made clear its displeasure at not being consulted on the tactics deployed.

BP is seen as unlikely to give up any of its lucrative Algerian assets, but security concerns will now, inevitably, weigh heavily on future investment decisions.

Only France has refrained from any form of implied criticism, a stance analysts say reflects the permanently fraught nature of relations between Paris and its former colony, and the fact that the French airforce requires access to Algerian airspace for its bombing campaign in neighbouring Mali.

However it turns out, the hostage taking is a great coup for its alleged mastermind, the one-eyed Islamist leader, Mokhtar Bel Mokhtar, who has been public enemy number one of the security services for years, according to Paris-based Algeria expert Khadija Mohsen-Finan.

“It has shown up in a very acute way, the weaknesses of the Algerian system,” said Mohsen-Finan, a lecturer at the Sciences Po university.

“Algeria presents itself as the strongman in the region in terms of gathering intelligence, fighting Islamist groups and securing its territory,” she said..

“But with this attack Mokhtar has shown he has the power to strike even in a highly secure zone and that the jihadis are alive and well.”

Algerian political expert Salah Mouhoubi agrees: “The attack shows that the government’s security policy has failed. Our country is not able to protect its borders.”

Events of the last few days have also stirred up unhappy memories of the civil war among many Algerians that has been reflected in critical press coverage of the government’s handling of the crisis.

“After 20 years of fighting terrorism, are we entering another spiral of Islamist violence?” asked the daily Liberte.

Throughout the bloody chaos that engulfed Algeria in the 1990s and left up to 200,000 of its citizens dead, the oil sector was left unscathed — and the fear now is that a hugely important red line has been breached.

“The taking of this site is catastrophic for Algeria because it has completely failed to develop its economy outside of the oil sector,” said Benjamin Auge of French think-tank IRFI.

Analysts also fear that the attack, which the Islamists have framed as revenge for French bombing in Mali, could exacerbate divisions within the regime over the decision to cooperate with the former colonial power.

“There are a lot of people very opposed to the decision to allow French planes to overfly Algerian airspace — it is a source of tension between factions in the government,” said Mohsen-Finan.