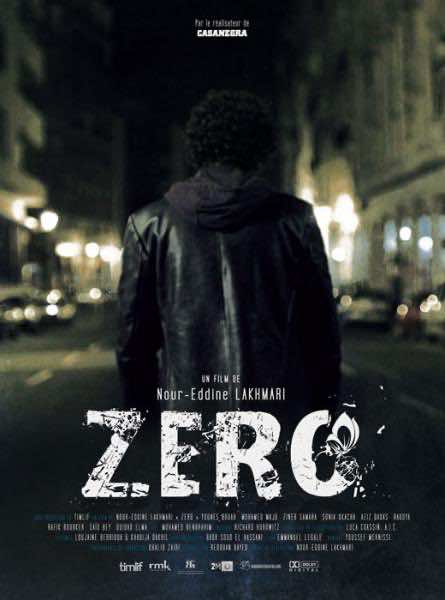 After few years of waiting, Nour Eddine Lakhmari, the filmmaker of Casanegra who managed to attract the attention of millions, has released his new movie Zero. This time, curiosity is the big title of such incident especially after the enormous success and the huge controversy that Lakhmari’s previous movie Casanegra raised. Not so different from the setting of Casanegra, Zero is also filmed in Casablanca preserving the same language of the street as in Casanegra. Zero is about a policeman, nicknamed Zero, who is going through some difficulties at the personal and professional levels. While taking care of his old veteran father who is on a wheelchair, he takes up a mission to find a lost girl whose mother has been looking for everywhere in the big city of Casablanca.

The movie treats one of thorniest and most serious issues dominating Moroccan society, which is corruption. It shows how corruption is rooted in the hearts and the mentalities of the people, starting from prostitutes in the street to prominent officials. The movie suggests that one individual can make change and fight the corrupt environment he is surrounded by in the person of Zero. Yet, the death of Zero at the end of the movie changes its discourse to leave the audience’s questions unanswered. Zero, the protagonist, represents the category of a small police officer who suffers under his corrupt superior. Throughout the whole movie, the audience is introduced to a character that is full of contradictions and torn between good and evil.

What makes the movie so self-contradictory is the fact that the same man who endeavors to fight corruption and plays the role of a hero is himself trapped in corruption. One way is earning money by using his prostitute girlfriend to bait wealthy men and blackmail them after his girlfriend had already got paid, just to give the money to him and accept, not without showing her un-satisfaction, whatever amount he deems enough in return for her efforts.

Zero, in this context, does only make us wonder who is in the right position to fight corruption for a better society and better Morocco. Zero also makes us wonder if there isn’t a better way for the filmmaker to make his point of view through without excessive use of offensive and obscene language. This reminds us of Casanegra with all its mysterious and provoking discourses to ask the same question again: who is the real target audience? Is the movie language supposed to attract or provoke the largest audience possible? Zero’s language, indeed, is too offensive and inappropriate to make it a family movie.

Another common denominator between Zero and Casanegra is the setting. Zero is also filmed in Casablanca from the beginning till the end and it is mostly shot at night. The audience sees only the dark which probably reflects the theme of the film and the characters’ inner side. This makes Lakhmari fall in the trap of self-repetition and duplication so that his films are very predictable unless he changes his strategy and ways of seeing and representing things.

Lakhmari’s movies endorse a very tempting discourse that attracts critics and audience alike. People usually love to see whatever is so mysterious and unpredictable, which has become Lakhmari’s finger print. When the movie Zero was shown in movie theatres, many Moroccans specifically young teenagers and young adults were there to see it and explore its content.

Last but not least, one cannot deny that Lakhmari deals with taboo issues in a very different and daring way to the extent of having been able to shape an explicit identity to his films in Moroccan cinema. Yet, the question that remains is whether films such as Zero and Casanegra really represent Morocco, what side they do try to hide or distort and what added value they can bring to its image on the big screen.