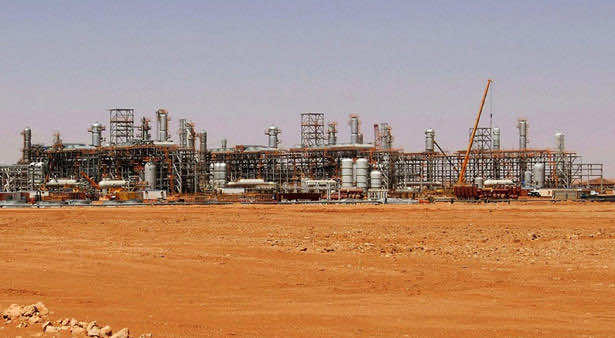 The apparent leader of a commando group that took hundreds of gas workers hostage in Algeria warned in a recording broadcast Saturday that he would blow up the factory if the army got too close.

In the audio recording, broadcast by the Malian news agency, Al-Mulathameen Brigade commander Abdul Rahman al-Nigeri of Niger spoke late Wednesday as the Algerian military surrounded his fighters’ position at a BP oil plant deep in the Sahara desert at In Amenas.

At the time, Algerian soldiers had already mounted an assault that had killed a number of kidnappers and hostages. Nigeri said that half of the fighters and 35 hostages were killed, while the Algerian authorities had cut off ground communications.

“By Allah, we will blow them up if the Algerian army gets close to us.”

Algerian troops stormed the plant earlier Saturday to end the hostage crisis that left 23 foreigners and Algerians dead, seven of them executed by their captors in a final military assault.

Twenty-one hostages died during the siege that began when the Al-Qaeda-linked gunmen attacked the In Amenas facility deep in the Sahara desert at dawn on Wednesday, the interior ministry said.

The kidnappers killed two people on a bus, a Briton and an Algerian, before taking hundreds of workers hostage when they overran the gas plant.

Thirty-two kidnappers were also killed, and special forces were able to free 685 Algerian workers and 107 foreigners, according to the interior ministry.

Among the dead were an unknown number of foreigners — including from Britain, France, Romania and the United States — and many were still unaccounted for, including Japanese.

Nigeri was said to be a senior lieutenant to the overall leader of the kidnappers, Algerian Mokhtar Belmokhtar, a former Al-Qaeda commander in North Africa.

Belmokhtar’s “Signatories in Blood” group had been demanding an end to French military intervention against militants in neighboring Mali.