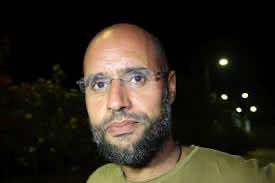 Lawyers defending Moamer Kadhafi’s son Seif al-Islam at the International Criminal Court on Monday accused Libyan authorities of conducting a “Kafka-esque show trial” after he appeared in a court in his homeland for the first time last week.

The latest broadside in the legal tug-of-war between The Hague-based ICC and Tripoli over where Seif, 40, should face justice came after he appeared in the dock in the Libyan town of Zintan on Thursday on charges of “undermining state security”.

The Libyan charges were levelled after four ICC envoys went to Zintan in June and were detained for nearly a month, triggering a diplomatic row.

One of the four, Australian lawyer Melinda Taylor, was accused of carrying a pen camera and attempting to give Seif a coded letter from his former right-hand man Mohammed Ismail, who is wanted by Libyan authorities.

After Kadhafi appeared in court, ICC lawyers on Monday submitted an urgent request to the ICC “to issue an immediate decision on the admissibility of the case, and to order the government of Libya to immediately surrender Mr Kadhafi to the custody of the ICC”.

The ICC is mulling a Libyan request to put Kadhafi and former spy chief Abdullah Senussi on trial there, while the ICC itself wants to try Kadhafi on charges of crimes against humanity committed in the conflict that overthrew his father in 2011.

The ICC lawyers said that Kadhafi “is essentially being tried for attempting to communicate with the ICC via his Counsel in relation to the fact that his rights had been violated”.

“Prosecuting a defendant for trying to defend himself epitomises the very definition of a Kafka-esque show trial.”

The ICC lawyers said Kadhafi’s trial on security charges was “a completely unrelated, and abusive prosecution”.

“Such strong-arm tactics have absolutely no place in a court of law, or in any country, which claims to respect the rule of law.”

The ICC, which was mandated by the UN Security Council to investigate the Libyan conflict, issued arrest warrants in June 2011 for both Seif and Senussi on charges of crimes against humanity.

Lawyers for the two accused have said they will not get a fair trial in Libya, which has until Wednesday to submit its latest report to the ICC in a bid to have the court quash a surrender request.