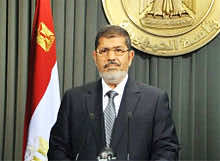 “We do not accept at all the military intervention in Mali because that will fuel conflict in the region,” Morsi said at the opening of an economic summit in the Saudi capital.

French and Malian troops on Monday recaptured the key towns of Diabaly and Douentza in a major boost in their drive to rout Al-Qaeda-linked rebels holding the country’s vast, arid north.

But Egypt’s Islamist president argued any intervention in Mali “should be peaceful,” and called for funding on “development” in the African nation.

“We do not accept extremism, violence, or aggression against civilians, but also we do not want to create a new bloodbath,” he said.

France swept to the aid of the crippled and weak Malian army on January 11, a day after the hardline Islamists made a push towards Bamako in the government-held southern triangle of the bow-tie shaped nation.

It won backing for its action from the UN Security Council last week.

A UN-approved African-led intervention force known as AFISMA is currently being set up but needs up to 200 million euros ($265 million).

The crisis first erupted when the nomadic Tuaregs, who have long felt marginalised by government, launched a rebellion a year ago and inflicted such humiliation on the Malian army that it triggered a military coup in Bamako inMarch.