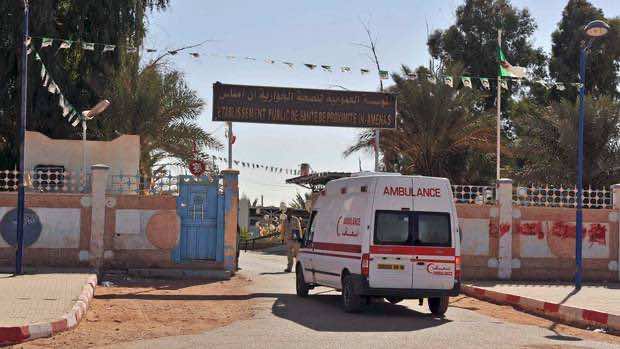 Japan was left reeling Tuesday after the deaths of at least seven nationals in the Algerian desert siege, with calls for greater protection for those working abroad and a realisation its citizens are not immune from terrorism.

Newspapers and television programmes carried extensive coverage of the late night confirmation of what the country had been dreading, with the respected business daily Nikkei saying the anger Japan felt was “abominable”.

Moments after Prime Minister Shinzo Abe told the nation seven of those working with or for plant builder JGC in the Sahara desert had been killed, company spokesman Takeshi Endo paid tearful tribute.

“We lost many capable employees. I cannot find the right words,” said Endo as he choked back sobs. “It’s just unbearable”.

Three other Japanese employees remained unaccounted for after the siege in which heavily armed Islamists overran the gas complex.

The personal stories of the victims have stoked the sense of outrage. It emerged that one of those killed was reaching the end of a long career in the world’s trouble spots — and had only been sent back to Algeria at the last minute.

Several newspapers demanded Tokyo beef up its intelligence operations and co-ordinate its responses with countries like Britain and the US.

“The anger we feel is abominable,” the Nikkei said in its editorial. “The international community must become united and must prevent vicious terror attacks like this.”

It added that the Japanese government must step up its efforts to safeguard nationals working in places that are increasingly important to the country’s energy-starved economy and co-ordinate intelligence.

“There is only so much Japan can do to collect information in the African continent. We should consider a structure under which relevant countries can effectively share information.

“But at the same time, we must also arrange ways and methods to rescue Japanese nationals in case of emergencies,” it said.

The Mainichi newspaper echoed the call to boost intelligence operations and increase exchanges with foreign spy agencies and military personnel.

“The Japanese government’s measures to deal with the situation were late because information necessary for crisis management did not come as it wished,” it said.

The Mainichi also said that young Japanese who were eyeing a career abroad, doing jobs that could be vital to the country’s prosperity, may be frightened off by the hostage crisis.

A 24-year-old postgraduate student at top-ranking Keio University in Tokyo told the paper he had been looking for opportunities in the region.

“I had believed that people in the Middle East are friendly toward the Japanese and I thought the Japanese are safer there than Westerners are,” he said. “But this has made me worry.”

It emerged Tuesday that one of the seven known to have perished was a 66-year-old engineer who had spent much of his career in the world’s danger zones.

Rokuro Fuchida had believed his work in Algeria was done last year when he returned to Japan to celebrate New Year with friends and family, a relative told the Asahi Shimbun newspaper.

He was called back to Algeria to fix a glitch just days before the militants began their bloody rampage.

“Had he not returned, this wouldn’t have happened,” the relative told the newspaper.

Over the course of a varied career, Fuchida had worked in countries across the Middle East and in Russia and Vietnam.

Last year the construction company that employed him landed a contract with JGC for the work in In Amenas.

Ahead of his deployment to Algeria, Fuchida wrote excitedly about his upcoming mission on his Facebook page.

“I’m working all around the world, aiming to see shining stars. Currently I’m working in Saudi Arabia (where Muslim laws are particularly strict). I temporarily returned to Japan for my vacation,” he wrote.

“Next, I expect to be in Algeria on the African continent to see the starry sky!”