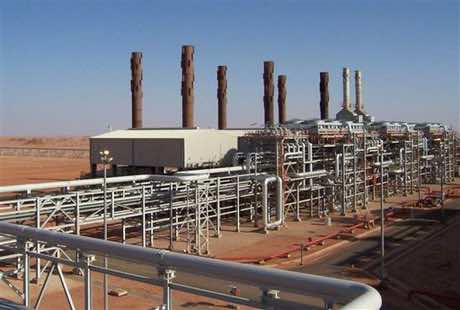 Algerian authorities were searching on Tuesday for five foreigners still missing from a bloody hostage crisis at the In Amenas gas plant, which was slowly being brought back on stream, a security source said.

“Still no news about the five missing foreigners,” the source told AFP, after the final assault launched by Algerian special forces on Saturday against the Islamist militants who seized hundreds of hostages when they overran the plant.

“Work to restart the complex has begun,” the same source said, after a demining and clearance operation at the sprawling desert site was completed.

“But we will have to wait for a week before everything returns to normal,” he added, as there were complicated technical procedures involved in resuming gas production.

Algeria’s Energy Minister Youcef Yousfi had said on Sunday that the wet gas production plant would restart “in the next two days,” adding the damage caused during the four-day crisis was “not significant”.

Employees not being treated for shock have been called back to the plant to help with restarting it and specialists have also been brought in from other sites, the security source said.

Thirty-seven foreigners of eight different nationalities and an Algerian were killed, some of them brutally executed, by the hostage-takers, who were demanding the release of Islamist prisoners and an end to France’s intervention in Mali.