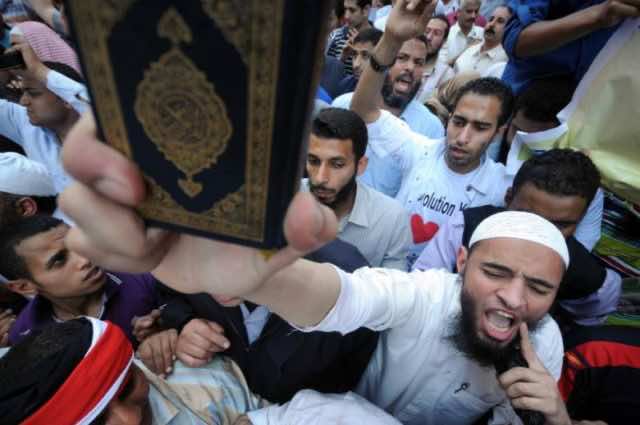 Casablanca – As the Muslim world lives today an unprecedented ascendency of Islamism, the dialectical wrangling between the secular claim and the Islamist advocacy is propelled once again to the forefront of the burgeoning Arab democracies. Under the general binary of secularism and Islamism, a miscellany of colliding paradigms and percepts calls for disentanglement, identification and positioning.

The most compelling issues that fortify the wall of mistrust between the proponents of each trend pertain to individual moral accountability in the public space. For the religious reactionaries, the aura of moral accountability needs to be expanded to more private matters, whereas the secular forces in predominantly Muslim countries want to embolden further the secularization of their societies by confining religion to the private domain.

The rivalry between these ideological foes revolves around the power of the individual and the power of religion. Therefore, their ardent defense of their respective views is fraught with suspicion and fear. Indeed, Islamists cannot tolerate the state of moral decadence spawning from the rift between religious teachings and individual conduct, whereas the secular politicians and intellectuals are more preoccupied by the breadth of individual liberties and constantly haunted by the menace of religious coercion.

Thus, the spiritual authority of Islam finds itself challenged is such pluralistic societies wherein the adherence to the broad and the narrow instructions of Islam can be subordinated, dismissed or overtly sanctioned by opposition. The first Islamic state founded by the prophet Mohammed (PBUH) after the Hijra in 622 CE was primarily an attempt to find a safe haven for the followers of the new faith. Therefore, we can assume that the first Islamic state drew its legitimacy and its durability from the force of religion. In the authentic context of divine revelation, Muslims coalesced around the prophet to buttress their faith and lay the foundation of the Islamic model of public governance.

In this sense, religion became essentially the new cohesive factor that rallied a large number of believers from different backgrounds and often from rival tribes. The challenge for the prophet was to dispel social discrepancies, racial differences and, above, all tribal animosity by setting faith at the core of the Islamic state.

Centuries later, the semi-secularization of many Muslim countries in the post- colonial period has widened the rift between the perception of Islam as a mode of governance and the practice of politics. The concept of democracy as it was propounded in western academia permeated the political circles in Muslim countries. The Western ideals of freedom and democracy were imported by a large number of intellectuals educated in the West.

The intrusion of new political paradigms as the ideal manifestation of justice and equity in Muslim societies engendered a condition of ideological alienation which culminated in the burgeoning of the first buds of religious revivalism spearheaded by a number of scholars like by Jamal ad-din Al Afghani and Muhammed Abdu. The obstinacy of many Islamist movements to restore the Golden age of the Caliphate was first and foremost a reaction to the political and cultural hegemony exerted by imperial powers.

The aversion towards the cultural imposition on Muslim societies stemmed initially from a deep-seated hostility towards colonialism as the epitome of oppression and dispossession. On the other hand, the antipathy felt towards the Westerner was impelled by a religious and ideological antagonism manifest in the juxtaposition of the Muslim “self” and the unbeliever “other”.

Nonetheless, in the modern context, the opposition between the “Fervent Muslim” and the “westernized Muslim” has become an intrinsic problem inherent in Muslim societies. The real debate among Muslims today is not about the legitimacy of Islam as a reference, but mainly about the breadth of its jurisdiction in public life. The contention becomes more abrupt in a situation where proponents of secularism and those of Islamism are compelled to govern together within a coalition government as it is the case in Tunisian and Morocco.

The dissonance between Islamist and left-wing parties is likely to become an insurmountable obstacle owing to the force of advocacy of both camps that is motivated by ideological rancor rather than mere political positioning.

Facing the opposition, the Islamist politicians in an Islamist government become themselves jaded between two frames of reference, a religious and political. Therefore, the secular opposition represents a challenge not only to their political positioning, but also to their perception of religious authority.

In addition, the adherence to democracy as a system of government entails the acceptance of the majority will regardless of its ideological inclination. The majority entails also the existence of a reluctant minority that has different political or ideological claims. Hence the urgency to grapple with pluralism in a mono-faith society.

In this sense, pluralism constitutes a challenge for the Islamist narrative since the ultimate goal for moderate and hard-liners alike is to edify a moralist society in observance with Islamic principles. The wrangling starts when Muslims themselves produce different narratives on the breadth of Islamic authority.

Tariq Ramadan holds that the reconsideration of the sources of legislation is susceptible to displace the gravity center of Islamic authority. The main divisive issue that will come to the forefront is the authorization of Islamic principles in the public sphere. The secular forces naturally claim a neutral public dominion, whereas their religious counterparts advocate the Islamization of the public space towards an ethical and perceptible conformity and uniformity.

Tariq Ramadan in his book, Islam: the Radical Reform postulates that the public sphere can be neither religiously nor culturally disengaged. He considers that the emergence of the cultural and religious identity is a “natural phenomenon and undoubtedly inevitable and was never perceived as an impediment to religious and cultural pluralism”.

The ideological discordance over religion and politics cannot be settled without the alacrity of all partakers for debate, consensus and concession when need be. It is noteworthy that these ideological debates remain the privileged burden of intellectuals and politicians and may not be probably extended to the masses unless the more pressing issues namely life standard, employment and healthcare are abrogated.

It is no secret that the newly liberated Arab countries are plagued with the residues of corruption and nepotism. As a result, the ideological debates over religion are still lurking, although overshadowed by the urgency of the current juncture. The challenge facing Muslims are immense and multifaceted. They pertain to self-recognition, self-positioning and the disposition foo reformation. The ability to disentangle the self and the imagined self from this maze of factors, obstacles and aspirations maybe the first step towards a reconciliation of many Muslims with their past and their compelling present.

Loubna Flah is a Moroccan national. She earned a master’s degree in Biochemistry from the Mohammedia faculty of science and technologies. She obtained also a bachelor degree in English studies from Ain Chok University after writing a dissertation about the aspects of sexism in Moroccan Arabic. She graduated from the Ecole Normale Superieure in Rabat as a high school teacher of English. (Email: [email protected])