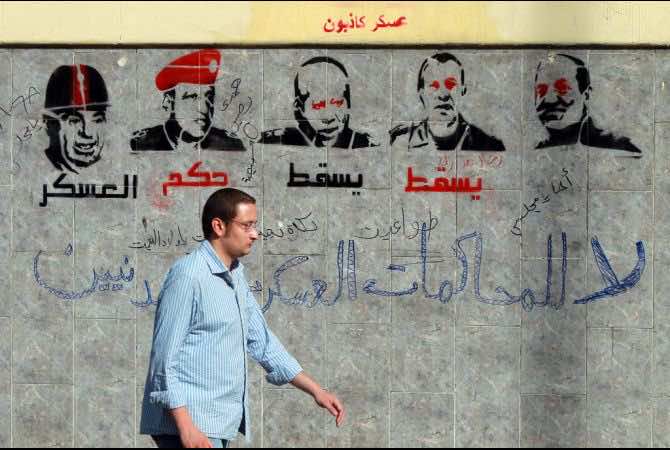 In just three sentences on a large wall in Cairo, the artist sums up the evolution of the Egyptian revolt: “2011, Down with Mubarak’s rule. 2012, Down with military rule. 2013, Down with Brotherhood rule.”

Since the start of the popular uprising that toppled Hosni Mubarak, street art has become the newest form of alternative media, documenting events, struggles, highs and lows with political messages that are as gutsy as they are colourful.

The urban canvasses tell the story from the huge anti-Mubarak protests on January 25, 2011 to the strongman’s resignation 18 days later, the electrifying sense of victory that followed to the disappointment and anger at the interim military rulers.

Painted scenes depict the bloody battles, stencils pay homage to activists who died and graffiti calls for the trials of those seen to have escaped justice.

On any given day, the walls in the streets surrounding Cairo’s iconic Tahrir Square deliver the revolutionary headlines of the day and serve as a central mood monitor.

From scribbles in black spray paint to elaborate colourful murals, there are messages everywhere and it seems all surfaces — walls, railings, traffic signs — have become legitimate expression boards.

“Graffiti took off with the revolution. The content is mainly political and it changes based on events,” says Mohammed Khaled, a student at Cairo’s Fine Arts institute.

“When something happens, people go and draw about it, then talk about it,” he tells AFP.

Khaled says his brother’s injury in 2011 during clashes with the armed forces in October 2011 turned him from art student to graffiti warrior. “That’s how I got involved,” he says.

Today, much of the anger on Cairo’s walls is directed at Islamist President Mohamed Morsi, who is accused of failing to reform post-revolution Egypt while consolidating power in the hands of his Muslim Brotherhood.

But the spaces are not just reserved for the opposition. On the city’s walls, Morsi is a pharaoh, an octopus, a snake, a clown or a hero, depending on which side of the political divide the artist falls.

“The creativity is increasing, even in terms of tools and materials and people want to express themselves better,” says Diaa El-Sayyed, who dropped his studies in computer science to pursue art.

“I wanted to say something and I didn’t know where to say it, so I started painting,” Sayyed says from a scaffolding where he is working on his latest piece.

But the new freedom of speech imposed by the revolution — such political street art would have been unthinkable under Mubarak — unnerves authorities who have taken to erasing the more controversial murals.

On grey walls covered by decades of dust across Cairo, rectangles and rectangles of fresh white paint are almost as powerful an image as the angry graffiti they are trying to hide.

“If one of the my works has been erased, then I know it stirred something,” says Khaled.

In December, anti-Morsi protesters furious he had granted himself sweeping powers to push through an Islamist-drafted constitution vented their anger on the walls of his presidential palace. It was his supporters who wiped off the offending messages.

As the second anniversary of the revolt approaches, the country is deeply divided between Morsi’s mainly Islamist supporters and the opposition of liberals, leftists, Christians and also deeply religious Muslims calling for freedoms and the separation of state and religion.

Cairo’s street art recounts the past, expresses the anger of the moment, but also looks to the future.

Across the capital, the date “26/1” is spray painted along with messages urging Egyptians to take to the streets on Saturday when a court is to issue its verdict in the trial of 73 defendants in the country’s deadliest football disaster in Port Said a year ago.

The clashes in the Suez Canal city between fans of home side Al-Masry and Cairo’s Al-Ahly left over 70 people dead, and sparked days of violent protests in Cairo, in which another 16 people were killed.

Many believe the rioting was orchestrated either by the police or Mubarak’s supporters.

Hardcore fans of Al-Ahly club known as the Ultras who played key role in the uprising have already taken to the streets to demand severe punishment for those responsible for the stadium deaths.

On the walls of their club in central Cairo, reads the ominous message “26/1: Justice or Chaos.”