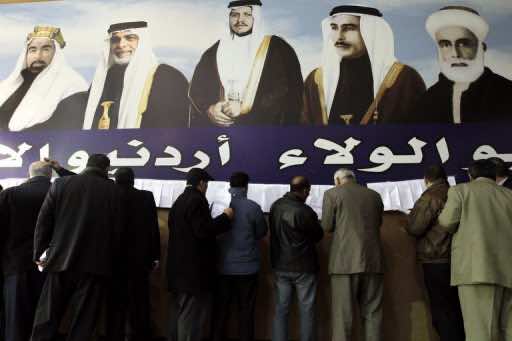 Polling stations across Jordan opened Wednesday in a vote boycotted by Islamists behind strident pro-reform protests who have already labelled as illegitimate what is expected to be an opposition-free parliament.

The Arab Spring movement that began two years ago and toppled four regimes across the region also sparked regular protests in Jordan, where a combination of youths and Islamists have been demanding sweeping political and economic reforms.

Their protests have become increasingly vocal and, during deadly November rioting over a sharp hike in fuel prices, there were unprecedented calls from some quarters for King Abdullah II to step down.

The monarch, whose throne is not seriously thought to be under threat, is hoping that Wednesday’s polls will produce a new crop of strong MPs who will work efficiently to jump start reform.

But analysts say tribal leaders and other pro-regime figures, along with independent businessmen, are expected to sweep the polls in the country of 6.8 million people.

The powerful Muslim Brotherhood and the National Reform Front of former premier and intelligence chief Ahmad Obeidat are staying away from the polls, which opened for 12 hours from 7:00 am (0400 GMT).

But the election “will add to problems instead of solving them, particularly under the boycott. We will see a parliament that does not have political weight”, analyst Oraib Rintawi, the Al-Quds Centre for Political Studies head, told AFP.

The king has said that he plans for the first time to consult with MPs before naming prime ministers, insisting on Jordan’s need to create strong political parties to help pave the way for parliamentary governments.

But the Islamists say there is no real will to reform.

“Our boycott was the right decision because a parliament or government that is imposed on people is illegitimate,” said Zaki Bani Rsheid, the Brotherhood’s deputy leader.

The Islamists won only six seats in the 2007 election but wield considerable influence on society.

They object to existing constituency boundaries, which they say over-represent loyalist rural areas at the expense of Islamist urban bastions.

They and Obeidat’s front are also angry at the lack of genuine reform, little progress in fighting corruption and a failure to move towards a constitutional monarchy with the premier chosen by parliament rather than the king.

The polls come as Jordan faces acute economic problems, including a $5-billion (3.6-billion-euro) budget deficit, and challenges in coping with more than 300,000 Syrian refugees who have fled their war-torn country.

Unemployment in the poor desert kingdom officially stands at 14 percent, but non-governmental sources put the figure as high as 30 percent, and a majority of the country’s youth are without jobs.

King Abdullah has urged people to take part, calling the boycott “a tremendous miscalculation”, and Wednesday has been declared a national holiday to encourage the 2.3 million registered voters to turn out.

Those who do turn out at the 1,484 polling stations will choose from 1,425 candidates, including around 140 former MPs and 191 women contesting 150 seats in parliament’s lower house.

Some 47,000 police are being deployed to provide security.