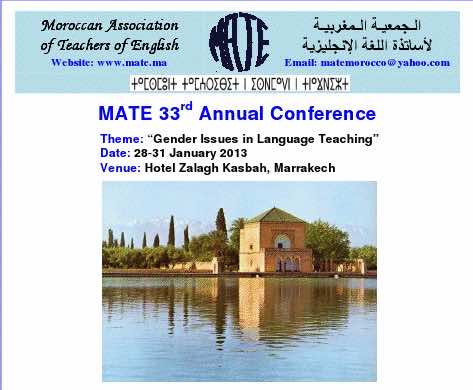 Taza – MATE’s 33rd national conference is overloaded with ideology from head to toe. It leaves no doubt that it is totally erroneous to assume that the teaching of English language is innocently and solely governed by the principles of Applied Linguistics.

Sometimes those principles, if scrutinized well, seem like a mere skillful sort of camouflage that furnishes the scene for some imperialistic values to take place and flourish in case teachers were socio-politically insensitive. Tell us so we can rejoice? Have we addressed all the purely linguistic issues in our classrooms and gender is all what’s left? Are we done with all the challenges facing the teaching-learning enterprise to start chatting about gender issues? It’s really ridiculous!

It would be ok if it is a mere familial huddle to reunite with all friends and reminisce on past memories, cherishing the tranquility in the hotel, the food, the drinks, etc. But it would be a subject of fierce criticism if it is meant to shape the audience’s thinking and spoon-feed them with western values with the intention to disseminate them to impressionable teenagers in the classroom.

It’s obvious that this controversial theme is chosen shrewdly to serve certain hidden agenda, especially after the ascendance of the Islamic trends to power. It becomes the order of the day for some liberalists and secularists to take women as Trojan horse to fervently criticize the current Islamic parties. Those who advocate secularism and liberalism proved to lack the necessary morals and values that would enable them gain the Moroccans’ plaudits and approval.

Moroccan society, especially the upper layers of the middle and lower classes have, spontaneously and in spite of the regimes constraints, adopted the mannerisms of religiosity with new touches of fashion and modernity. In that, one cannot help but notice the increased instance of women donning the Hijab and young men preferring being bearded, the mounting popularity of independent preachers; the rising demand on Islamic schools and Islamic banks; the growing popularity of religious-leaning T.V channels, and the increasing number of Americans and Europeans converting to Islam.

It is obvious the theme has been picked up by highly “influential” Moroccan scholars that have been indefatigably indoctrinating students, teacher trainees and teachers into the Western point of view. It is like the U.S government that unabashedly sends troops to different nations to spread democracy, these scholars are recruited in a way or another to shamelessly hail for the Western modes of behavior through feminist writings, revolutionist literature and materials that openly advocate radical social changes into our schools. I am not being a misogynist at all, rather a critical linguist who is being in a daily contact with students, witnessing how they are giving up their own identity to embrace the western one that is being made flowery.

I plead with teachers of English to be critical not to swallow those non-sense lectures like western women are freer than the women in Morocco; they can smoke and have boyfriends or Moroccan women suffer from low-esteem, while their Western counterparts are well adjusted, or the dominance of males pictures over females’ in textbook, etc.

These destructive ideas do nothing but weakening the social fabric of the Moroccan society and culture. I plead with my fellow teachers never applaud a native speaker unless s/he deserves, never take a native speaker as versed in applied linguistics and never swarm around him/her during tea break just for being a mere blue-eyed, blond-haired person. It would be more elegant and wise if these acts are to be done for an experienced gray-haired Moroccan teacher.

The World standards have changed and today’s West is no more that of yesterday. It is also rife with shameful socio-economic problems. This is no more than just the pot calling the kettle black. Gone, therefore, the times when we were empty vessels ready to be filled with whatever imported from the West. The Arab spring that marked the end of the post-colonial era is a clear example showing that we have the vision and the potential to revolt, create, invent, plan, execute and excel in every field including education for the simple reason that no one knows our environment better than we do.