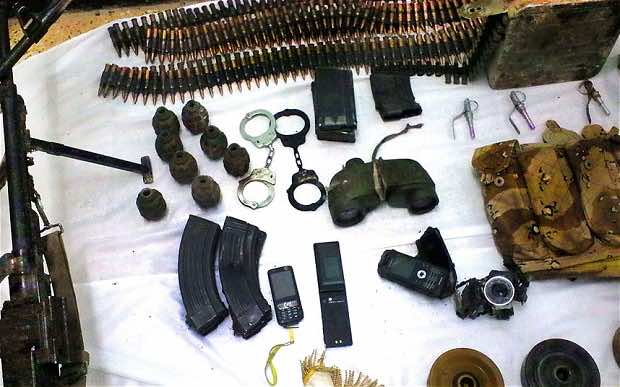 The arms used by militants who seized an Algerian gas plant in a deadly hostage-taking drama came from Libyan rebels who last year overthrew Moamer Kadhafi, an Algerian daily reported on Wednesday.

“The first interrogations of the three terrorist captured by security services have revealed that rebels in Zintan (southwest Libya) were behind the sale of the arms used against the gas plant,” said Echorouk.

Algeria has said 37 foreigners of eight different nationalities and an Algerian were killed in the four-day siege, which ended on Saturday in a rescue operation by security forces who captured three of the assailants.

The militants’ chief, Algerian Mohamed Lamine Bencheneb, killed in the assault, negotiated the sale of Kalashnikov assault rifles for $500 each and rockets priced at $800, according to Echorouk.

A well-informed source in Libya told AFP on Tuesday that the militants received logistical aid from Islamists in the neighbouring country.

“Logistical support was provided from Libya,” said the source close to hardline Islamist groups in Libya, which has seen a rise in extremism since the fall of Kadhafi.

The source did not specify the exact nature of the aid but acknowledged that Libyan Islamists were also responsible for establishing contacts between the captors and the media.

The Tunisian daily El Watan, meanwhile, reported that “the operation was organised and prepared in Libya. Only some elements came from northern Mali to reinforce the group.”

Their heavy arms came from Libya “where tonnes of weaponry were dropped by French aircraft during the uprising against Kadhafi,” it said, quoting Tunisian security sources.