Morocco World News
Home Highlights on Morocco CAN 2013 : Morocco misses another chance to qualify to the second... 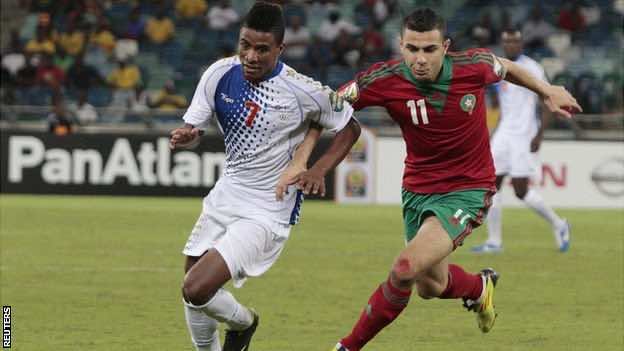 Morocco’s second game against Cape Verde in Durban’s Moses Mbhida stadium on Wednesday night was less than expected as the Atlas lions ended the match with a draw score 1-1.

Cape Verde’s Luis Platini was the first to score in the first half before Morocco’s striker Youssef El Arabi succeeded in equalizing at the 78th minute.

Cape Verde’s players looked confident and aimed to take their opponent by surprise and score an early goal, while Morocco seemed cautious and lacked a clear strategy to create any sort of threat.

Cape verde’s efforts to take the lead left Morocco’s goal keeper busy and the defense in an alert state. While watching the persistence of Cape verde’s forwards and their eagerness to score, it seemed that it was in the cards for them to put themselves ahead of the north Africans before the end of the first half.

The inevitable happened as cape verde’s Platini chipped over a dispatched pass inside the Moroccan net just minutes away before the end of the first half.

In the second half, the Moroccans determination to overthrow their opponent’s lead was obvious as they pushed forward and focused on the wings to make the difference.

Moroccans waited until the 78th minute to find the equalizer that came from El Arabi’s feet. The latter made no mistake in receiving Berrada’s pass and translate it into a decisive goal.

The game’s referee added five minutes of extra time but the match ended 1-1 with both teams finding themselves with two points in group A. South Africa took the lead of the group after defeating Angola earlier in the day.

Moroccans feel relieved after their national team avoided an humiliation from a team that qualified for the first time in its history to the continental competition. For the record, the goal scored by Cape Verde was the first goal of this team in an African Cup of Nations.

Now things look more complicated for the Moroccan national team after they missed two chances to put themselves in a comfortable situation before playing against South Africa, the host country.

For the Moroccan team to qualify, the only option they are left with is to defeat South Africa.