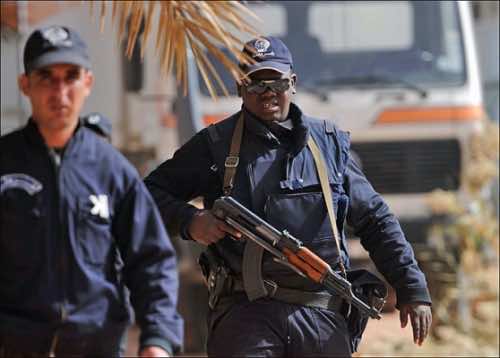 A spate of stunning terror attacks combined with a wave of arrests has Moroccans on edge.

In the wake of a deadly terror attack on an Algerian natural gas facility and the start of military intervention against jihadists in Mali, Morocco is taking a new look at the security situation in the Sahel.

Morocco took particular note of what happened the last week in neighbour Algeria.

“Having watched with great concern the hostage-taking operation, which claimed the lives of Algerian and foreign citizens at the In Amenas site in south-eastern Algeria, the Kingdom of Morocco wishes to express its solidarity with Algeria, its government and people, in the face of all security threats, and its condemnation of all forms of terrorism,” the foreign ministry said on Monday (January 21st).

“To date, the authorities have managed to disband a number of terrorist cells. But the risk remains, and terrorism could strike at any moment within the country,” Belghouati said.

The Morocco terror cell was the fifth to be uncovered since last fall. Several of the militants rounded up in recent months reportedly had ties to jihadists in Mali.

“Our country is very worried about this situation. Strategically, the region is in danger,” Moroccan MP Ahmed Zaidi pointed out, after the first cells were found in the fall.

Many citizens are equally concerned.

Karim Belmokhtar, 32, a teacher, said the security threat in the Sahel shows no sign of fading away over time.

“We need the countries to act to spread peace across the region. It involves everyone,” he said.

Jawad Kerdoudi, the president of the Moroccan Institute of International Relations, was keen to point out that even though Morocco is far from the theatre of operations, it is still affected by what is happening in the region.

“In fact, the threat from radical Islamists aiming to set up Islamic republics with Sharia as their fundamental law is becoming ever stronger in North Africa (AQIM) and West Africa (MUJAO). This threat is all the more serious because it is not just about a change in political regime, but about a change in society with everything that means in terms of the loss of democracy and freedom,” he said.

What happened in Algeria demonstrates that the security threat remains very real for the Maghreb, political analyst Samir Serraf said.

“The terrorists of In Amenas prepared their strike well, and they must surely have had accomplices in Algeria. So we have to work both around the borders and within countries to counter extremism and terrorism,” he said.

“We have to prevent young people’s problems being transformed into a ticking time bomb. It’s right that we should fight terrorists at the international level, but we also have to prevent the creation of the terrorists of the future,” she said.