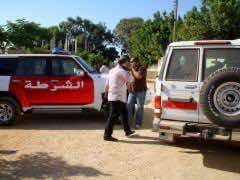 Britain’s Foreign Office on Thursday urged its nationals to leave the eastern Libyan city of Benghazi immediately, saying it had become aware of a “specific and imminent threat to Westerners” there.

“We are now aware of a specific and imminent threat to Westerners in Benghazi, and urge any British nationals who remain there against our advice to leave immediately,” it said in a statement.

But it added: “We cannot comment further on the nature of the threat at this time.”

The warning came a day after US Secretary of State Hillary Clinton gave an emotional appearance before Congress about the attack on the US mission in Benghazi on September 11 which killed the US ambassador and three other people.

Since the attack, Britain has advised against all travel to Benghazi and indeed most of Libya, with the exception of a few towns including Tripoli.