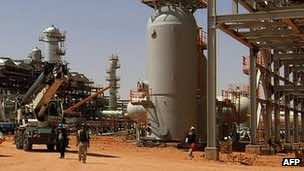 Algerian captives wrapped a turban around a Japanese colleague to smuggle him out of the besieged gas plant, company officials said Friday, as they recounted heroic tales amidst the horror of the deadly attack.

The seven Japanese survivors of the desert hostage crisis owe their lives to “patience, judgement, bravery and luck”, said Koichi Kawana, the president of their engineering firm employer JGC.

“One of them made it out because he stayed glued to the spot under a truck” as bullets flew in a fierce firefight, Kawana told reporters at the company’s headquarters in Yokohama, southwest of Tokyo.

During an hour-long news conference, Kawana stressed the debt of gratitude owed to the firm’s Algerian employees, who had put their own safety at risk to help their Japanese colleagues.

Heavily-armed Islamists overran the gas complex at In Amenas last Wednesday, sparking a four-day siege that ended in a bloody showdown with Algerian commandos.

At least 37 foreigners and one Algerian are known to have died, with witnesses saying the gunmen let Algerians and other fellow Muslims go.

One survivor told a company spokesman he had spent a restless January 16, cowering in his room at the residential camp after hearing the eruption of gunfire outside.

It was not until the following day and a gentle knock on the door from a familiar face that he saw any chance of getting out of the camp alive.

“Algerian staff wrapped my head with a turban and told me to cover my face with leg warmers,” the man told the spokesman.

“Then they huddled around me and smuggled me out of the camp” as if he was a fellow Algerian.

Dozens of foreigners were killed during the four-day standoff that ended in a bloody showdown with Algerian commandos on Saturday last week, with reports of summary executions.

Tokyo confirmed on Thursday that of the 17 Japanese men at the plant when the siege began, 10 had died.

Japan’s total — its worst terror toll since the September 11 attacks on New York — was the highest of any single nation and a rare taste of the jihadist violence for a country that has stayed away from Washington’s wars in Muslim lands.

Company president Kawana, who flew to Algeria to co-ordinate the firm’s response said he had been stunned to see the charred remains of vehicles and other wrecks that littered the plant.

Video footage broadcast in Japan and apparently taken in the immediate aftermath of the commandos’ raid shows the bodies covered by hastily arranged blankets or, in one case, a mattress.

A pair of abandoned shoes lie close to one of the corpses from which blood leeches onto the red Saharan sand.

Spatters at head height are clearly visible against a white wall, apparent evidence of an execution-style shooting.

Kawana said he cannot forget the rush of horror that flooded through him as he walked into the morgue to identify the bodies of the fallen.

“When I saw them, I prayed it was not them,” he said, pausing to gather his thoughts, tears visibly welling in his eyes. “But unfortunately it was.”

“I felt pain, pain and pain,” he said, biting his lip. “I was filled with sorrow.

“Some of my colleagues unleashed their sadness, crying out the names” of those who had died.

Kawana said the identification of the dead was only possible because the survivors volunteered for the grisly task.

“Although they themselves had a terrible experience, they worked hard to identify the bodies, hoping strongly they could bring them back to their families as quickly as possible,” Kawana said.

“They sorted things out one by one. They did a great job,” he said.

“I’m immensely proud of all of them.”