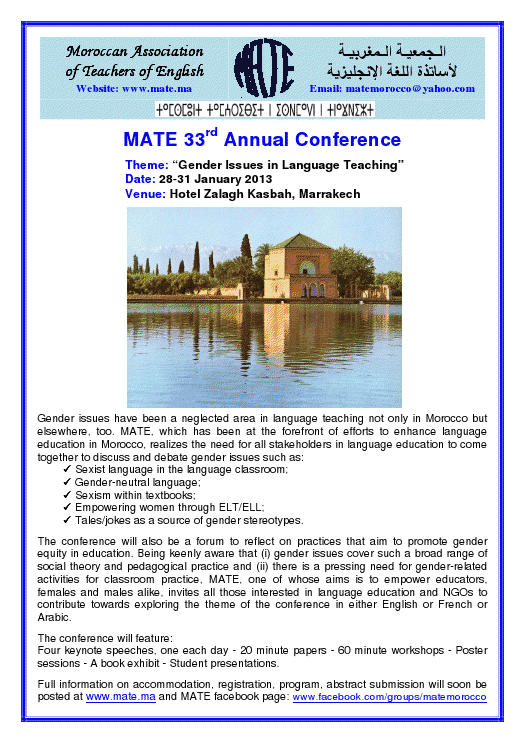 My attention has been drawn to an article that has been published recently on Morocco World News criticizing the choice of the themes of the Moroccan Association of Teachers of English (MATE) 33rd conference. I thought that a response, not a justification of the choice, would be relevant. The text below addresses some of the issues and the dirty insinuations alleged against MATE.

Should ideology be limited to exploring what gender relationships are like in an educational environment and to enhance pedagogical practices that seek to equalize opportunities and to neutralize the effects of discriminatory and exclusive factors, MATE thirty third Annual Conference should be proud of its insightful choice of the themes of gender issues in language education. Moreover, should anyone believe or would want to convince anyone that the teaching of any language, be it mother language, father language, second or nth language, is not essentially ideological in nature, that person would be as academically innocent as no one wants to be (cf. meaning of innocent in a good dictionary).

Likewise, anyone who believes or would want to make anyone believe that teaching languages is but a linguistic endeavor would be too innocent to be trusted with a class or with a line to write in a credible publication. Teaching languages is first and foremost teaching cultural, political, and ideological options. No one has any doubt about that ! More than this, teaching, or for that matter not teaching a language, national, regional, foreign, dad or alive, is always an aspects of how a society copes with the various imperialisms it is at grips with. Just consider how countries such as Morocco, Algeria, Tunisia, and Libya do not, or let’s say for the sake of political correctness, did not until very recently, teach Amazigh languages ! Hopefully, teaching languages will be an opportunity for both learners and their teachers to explore how cultural variance can be transformed into understanding, acceptance, and constructive synthetic options.

Crime is much worse than ridicule ! It is criminal to deny a professional community the right to raise and discuss an issue of critical relevance to it! It is worse to think that one can deride an honorable community, for purely personal reasons, by degrading its consensual professional discourse to mere chatting. It is even much worse when this discourse relates to a fundamental human right acknowledged and recognized by the religion of the land, the law of the land, and the aspirations of the majority of the population against the sickly repressive anachronistic fears of a few to lose their unrightfully inherited privileges over others.

The values of equality, equity, equal opportunity, freedom, and respect are neither Western nor Southern nor Northern, they are not specific to any culture nor to any civilization, they are and should be universal. Of course, there will be always those who will not accept these values and who will create others that privilege them and that they will hope would maintain and perpetuate the privileges they take to be their rights of exploitation and humiliation over others. These are generally socially, politically, psychologically, physically and intellectually impotent individuals who are unable to imagine worlds in which everyone should have to be made to submit to them by the force of the law and of a morality of their making.

Moroccan children, teens and adults alike should be educated in the skills of critical thinking, the competencies of assessing before adopting alternatives and adhering to choices, and of getting loose of whatever they judge is hindering their creativity, their potential for solidarity, and their drives for respecting difference and protecting the rights of others. Whoever thinks these are imperialistic values or an alienating ideology, let them speak.

The alleged ascendance of Islamic trends to power being part of the sociopolitical environment of the country, the statement that the choice of this theme might be in some way to counter it is a miserable communication failure. Why should any Islamist trend be opposed to gender equity or to equalizing learning opportunities in a language class as long ad these are the very foci of one of the themes of the conference at issue? The general understanding is that the official Islamic political agenda, although this is not our topic here, is to emancipate the human being and to re-establish a state in which all, men and women, would be as equal as the teeth of a comb, so where is the problem? A poorly chosen counter argument, indeed!

The theme at issue had been chosen by teachers, mostly practicing high school teachers from all over the country, of all genders, of all ages and of all the political choices present in the country. Furthermore, it has been validated through the various decision making processes and structures of MATE including regional branches, leaders of MATE projects, and had been posted for feedback on MATE website for weeks. No one, whoever she or he can be, can therefore be allowed to judge the decision of all MATE members or use this issue to surf on some political wave or to take an ego trip. So, trying to politicize this issue is a poor strategy. Anyone who does not approve of it can organize their conference on a theme focusing on how to disqualify some genders and on how to deny them rights and how to lock up men or women in prisons if they dare raise such issues. They can do this, this is a free country, that is, as long as they are not in full power, at least!

A critical linguist, what the h— that means? If not an ideological gimmick to mislead and to create confusion? Before anyone starts talking about troops being sent to places and making insinuations and judging, they need to take some time and find out about the official position everyone had taken and made public. It is too easy to make insinuations, but way too difficult to stick one’s neck officially and in public. MATE, for those who do not know it, was among the first NGOs to condemn foreign interventions in Arab and Islamic countries and about the only one to have suspended its official relations with organizations affiliated to countries concerned. The author of the article is formally requested to reveal the official positions he took in this regard.

Speaking of identity, it is too easy being summative and reductionist? I would love someone to tell me exactly what is the identity we, as Moroccans, wish to have, not to talk about the one we have had for centuries, because that one, if told in plain language can be frightening and, at times repulsive, and which I, for one, would be very cautious about claiming to belong to it uncritically. I hope and request not to be pressed to elaborate on this issue as history would be painful to relate.

When we, at MATE talk about Moroccan identity, we refer to a dynamic value that is by necessity ever changing, interacting with itself and influencing others and accepting their influence critically. No world is ever the same all the time, and no people will be abused for ever, and no people will be able to live in constant mistrust of others. Moroccan teachers are no puppets, they think of themselves as a privileged professional community, highly educated, highly aware and sensitive of the challenges, the stakes, the possibilities, the constraints, the expectations, the hopes, and the frustrations of their society and of their students. They are aware of their mission and of their responsibilities of opening to the country the prospects of development and change and of protecting it from the threats to the identity she wishes to cultivate, one rooted in the principles of solidarity, peace, respect of and acceptance of difference, equity, freedom of speech, freedom of opinion, and social, cultural, economic and political equality.

To conclude, it is interesting that the text does not refer to he second major theme of the inference, which focuses on the language education of learners with special needs. Maybe this theme is also imperialistic in nature and has been chosen for some hidden agenda to give over the country to the handicapped (A million excuses to my friends for the use of this word which I have banned from my register for a long time)!.

Also, maybe a look at the program of the conference will reveal that the focus is really on language education and on nothing else!

Mr Abdellatif Zaki is a professor at IAV, Rabat. He is the president of MATE. He published many books on Communication and Culture.