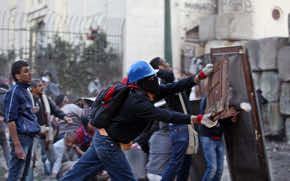 Clashes on Friday in several Egyptian cities during protests demanding change have left 110 people injured, an official with the central emergency services said.

Rallies against President Mohamed Morsi were staged across the country, including outside the presidential palace in Cairo where police fired tear gas to disperse protesters.

Egyptian protesters stormed the governorate headquarters in the canal city of Ismailiya and attempted to storm two other buildings elsewhere, witnesses said.

Protesters surrounded the governorate building in Damietta and in the Nile Delta city of Kafr El-Sheikh they stormed the courtyard of the governorate leading to clashes, witnesses said.

Protesters torched a Muslim Brotherhood headquarters and clashed violently with police as mass rallies shook the country on the second anniversary of an uprising that ousted Hosni Mubarak and ushered in Islamic rule.

Demonstrators outside the state television building in Cairo blocked traffic as marches of tens of thousands of people swarmed the capital, and tear gas was also fired at protesters in second city Alexandria.