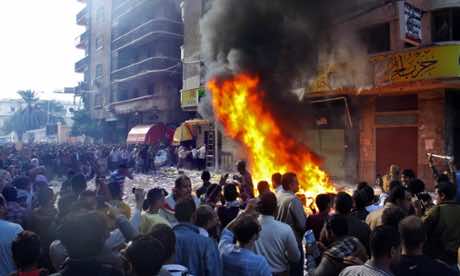 Egyptian protesters on Friday stormed the governorate headquarters in the canal city of Ismailiya and attempted to storm two other buildings elsewhere, witnesses said.

In Ismailiya, protesters entered the building, set fire to a room used by security services and looted furniture and equipment, an AFP reporter said.

In the Mediterranean city of Damietta, protesters surrounded the governorate building and blocked traffic in the area, clashing with police.

In the Nile Delta city of Kafr el-Sheikh, demonstrators entered the courtyard of the building and clashed with police.

Earlier in the canal city of Suez, protesters attempted to storm the governorate building, also leading to clashes.

The attacks came as tens of thousands took to the streets across Egypt to protest against Islamist President Mohamed Morsi, accusing him of failing the revolution that brought him to power.