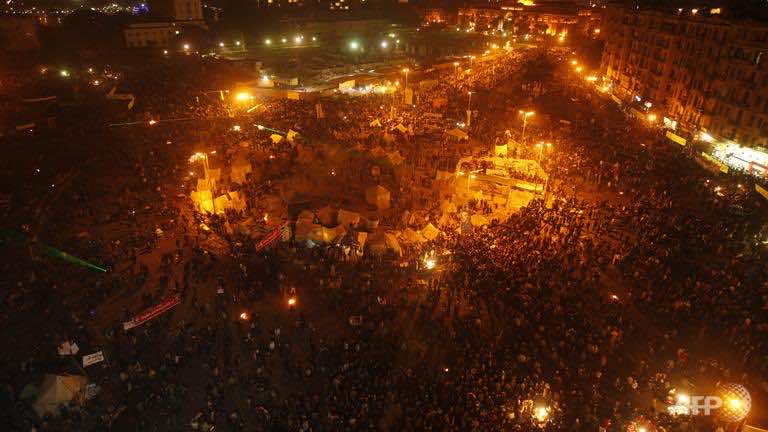 Protesters on Friday stormed a regional government headquarters and clashed with police as mass rallies shook Egypt on the second anniversary of a revolt that ousted Hosni Mubarak and brought Islamists to power.

The security services fired tear gas canisters in various locations across Cairo, including outside the presidential palace, at protesters who blocked off main roads in their tens of thousands.

The unrest came on the second anniversary of a revolution that brought to power Islamist President Mohamed Morsi of the Muslim Brotherhood, and a day after clashes between protesters and police.

After the seismic political changes of 2011, the Arab world’s most populous nation is struggling to find a balance between a leadership that boasts the legitimacy of the ballot box and opponents who accuse it of betraying the goals of the revolution.

Egypt is also in the throes of an economic crisis as foreign investment and tourism revenues dwindle, the Egyptian pound stands at its lowest level against the US dollar and a budget deficit shows no sign of recovery.

Protesters stormed the governorate headquarters in the canal city of Ismailiya, entering the building, setting fire to a room used by security services and looting furniture and equipment, an AFP reporter said.

Demonstrators had earlier set fire to the Brotherhood headquarters in Ismailiya, the reporter said, and black smoke billowed from the windows of the apartment housing the movement’s Freedom and Justice Party (FJP) offices.

In the Mediterranean city of Damietta, protesters surrounded the governorate building and blocked traffic in the area while in the Nile Delta city of Kafr el-Sheikh they stormed the courtyard of the building and clashed with police.

In Cairo, police fired tear gas at protesters outside the presidential palace, where violent clashes between Morsi’s allies and foes in December killed several people.

Protesters outside the state television building blocked traffic as marches swarmed the capital. Army and police forces were deployed to protect the building which houses the information ministry as well as state television and radio.

Protesters set fire to tyres and blocked traffic in both directions on the 6 October Bridge, a vital flyover that connects east and west Cairo.

Some protesters also blocked the underground metro at several stations in central Cairo, paralysing the public transport used by millions every day.

“The smoke is black, there is a lot of gas. There are people on the ground because they can’t breathe,” one of the protesters, who gave his name only as Rasha, told AFP.

The emergency services gave an initial toll of more than 100 injured in Friday’s violence.

Thousands marched early in the day across Egypt, notably converging on Tahrir Square in Cairo — the focal point of the 2011 revolution — a day after clashes between police and protesters who attempted to pull down a cement wall blocking off the square.

In one street off Tahrir, dozens of youths threw rocks over the wall erected by security forces as police responded with tear gas, AFP journalists said. In the square itself, thousands of protesters chanted anti-Brotherhood slogans.

“The people want the downfall of the regime!” they chanted.

“Lift your head up high — you are not a Muslim Brother,” others said, echoing a signature chant of the uprising telling Egyptians to be proud.

“The performance of Morsi and his government is not good enough. If we give him the opportunity, the country will face ruin,” said shop assistant Mostafa Abdallah, 23.

The opposition had called for mass protests under the same slogan that brought Egypt to its feet in 2011: “Bread, freedom, social justice.”

The Muslim Brotherhood did not officially call its own rallies, instead marking the second anniversary by launching a charitable and social initiative dubbed “Together we will build Egypt.”

Morsi urged Egyptians to spend the anniversary in a “peaceful and civilised way,” in a Thursday speech marking the Prophet Mohammed’s birthday.