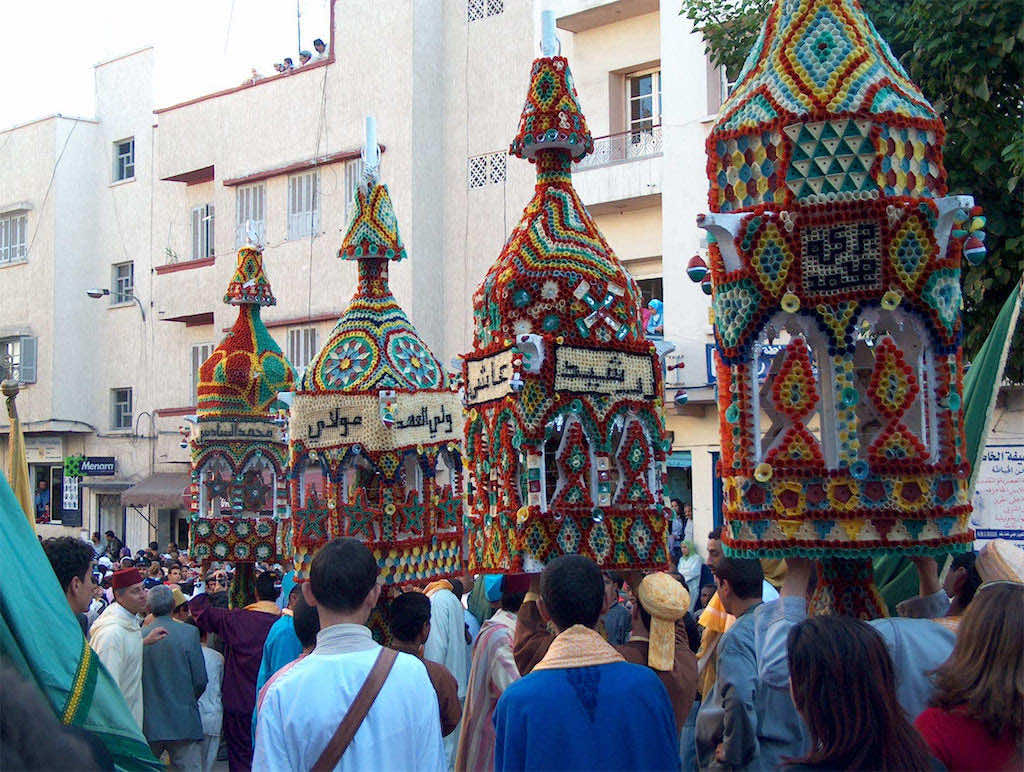 Washington – On January 24 Morocco like the rest of the Muslim world celebrated Eid Al Mawlid Nabawi, the Birthday of the Prophet Muhammad (12th of Rabî’ al-Awal), an important religious holiday for all Moroccans.

Unlike other Muslim countries, Moroccan shrines mark the day in a variety of ways: all-night vigils, processions, feasts, displays of horsemanship (called fantasia) and pilgrimages (called moussem Moroccan Arabic, mawsim in standard). Moussems often have a festive and playful atmosphere, especially in rural areas. The shrine of Sidi Abdallah Ben Hassoun in Salé near Rabat is the destination of the candle procession held annually on the day preceding the Mawlid. The procession of gigantic wax candles is carried from zawiya to zawiya (shrine) through the streets of the city before reaching the shrine, where the candles are kept until next year.

In the same evening the King as Commander of the Faithful, chairs a religious evening on the occasion of al mawlid Sharif. Moroccan religious scholars and imams are convened to this royal ceremony and the Minister of Islamic Affairs presents a detailed reports to His Majesty on all initiatives, programs and projects that the Ministry has undertaken under the supervision of the King to reform the religious field in Morocco. Since his ascension to the throne, King Mohammed committed himself to introduce major religious reforms that aim to give a correct image of Morocco Islam that preaches coexistence, tolerance and respect to other religions.

In fact Morocco is known to this day to be a major center of Sufism. It is sufficient to visit the shrines of Moulay Idriss al-Azhar (d. 213/798) in Fez and Moulay Abdessalam ibn Mashish (d. 622/1207) in Jabal al-Alam in north of Morocco to become aware of the degree to which Sufism is still alive in the land, which has been witness to some of the greatest Sufis over centuries. Sufism is not confined to the masses, as can be seen by witnessing the annual Eid al-Mawlid in the shrine of Khatm al-Awliya Mawlana Ahmed Tijani in Fez, which draws dozens of thousands of adherents from the globe (more than 300 million Tijani adherents worldwide). Sufism in Morocco, moreover, remains closely tied to the West and the Muslim world to such countries as Algeria, Mauritania, Tunisia, Syria, Egypt, Palestine, Mali, Senegal, Nigeria, Indonesia, and Java, many of whose orders are directly linked to those of Morocco.

The foundation of Sufism in Morocco came, of course, from the East, as did Islam. Yet the unusual type of Islam in Morocco, its life-style, its calligraphic art, its mosque architecture, and the coherently crystalline nature of its urban architecture—to say nothing of its Malikism—existed from the very early generations of Islam. Morocco would like to continue promoting a Sufi Maliki Islam based on tolerance, love and respect.