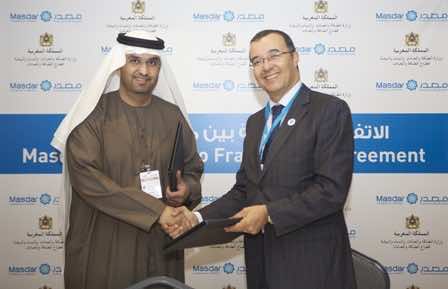 The Moroccan Ministry of Energy, Mines, Water and Environment announced the signing of a framework agreement with Masdar, a subsidiary of the Abu Dhabi government that was launched in 2006 with the view to “advance renewable energy and sustainable technologies.”

The agreement will enable both partners to thoroughly cooperate with each other in the renewable energy field.

During the sixth World Future Energy Summit (WFES), which was held on January 20 in Abu Dhabi,  the future of renewable energy and sustainable development was brought up for discussion.

Being one of the North Africa’s most promising clean energy markets, Morocco aims at having 42 percent of its total energy use from renewable sources by 2020.

Dr. Sultan Ahmed Al Jaber, CEO of Masdar, pointed out that “Morocco is an ambitious supporter of the adoption of renewable energy projects.”

In a statement carried by the UAE news agency WAM, Mr. Fouad Douiri, Morocco’s Minister of Energy, Mines, Water and Environment explained that “With tremendous wind and solar resources, Morocco has already strong and concrete achievements in solar and wind capacity.”

“As a country focused on the development of its renewable energy, we see major benefits in building a valuable cooperation with renewable energy players, in particular with the industry,” Fouad Douiri added.