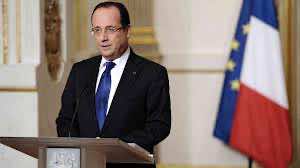 The two presidents discussed other “shared security concerns,” including Algeria, Libya and Syria, during telephone talks, the White House said in a statement.

“The president expressed his support for France’s leadership of the international community’s efforts to deny terrorists a safe haven in Mali,” it added.

In condemning a deadly hostage-taking operation by militants in Algeria last week, the two leaders “affirmed their mutual commitment to countering terrorism more broadly in North Africa,” according to the statement.

Preliminary estimates from the Algerian authorities say 37 foreign hostages and 29 kidnappers died in an attack at the In Amenas gas field and in the military operation that followed.

Hollande also thanked Obama for his “significant support” of the effort in Mali, the White House said.

The US Air Force has deployed C-17 cargo planes to carry French troops and equipment to northern Mali, where they are trying to help flush out radical extremist fighters.

The United States also was providing intelligence to France, drawing on its network of satellites and surveillance drones.
Paris has asked Washington to help with refueling its warplanes taking part in the fight against militant fighters in Mali, but Obama’s administration has yet to approve the request.

Obama and Hollande also “emphasized the need to rapidly establish” both an African-led military force in Mali and a “political roadmap that will lead to elections and restoration of democratic governance,” the White House said.

Turning to Libya, in the wake of an uprising that toppled dictator Moamer Kadhafi in 2011, the two presidents “noted the importance of sustained assistance to Libya as it works to build effective security sector
institutions,” the statement added.

Hollande and Obama also spoke about Syria, “expressing their strong concern about the humanitarian crisis affecting not just Syria but also neighboring countries and reiterating their commitment to assisting the Syrian people achieve political transition to a post-Assad Syria,” the statement said.

Syria’s civil war has already claimed the lives of more than 60,000 people since March 2011, according to the United Nations, which has predicted that the number of Syrian refugees in neighboring countries will double to 1.1 million by June if the conflict does not end.