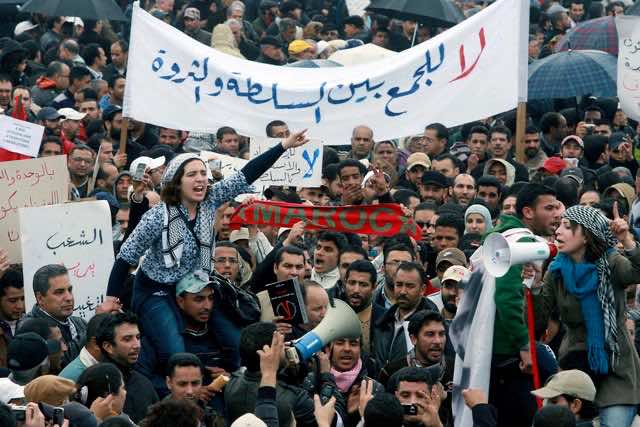 New York – The death of Tunisian vegetable seller Mohamed Bouazizi, who set himself on fire in protest of the Tunisian government, was widely reported in the Western media, and there is a fairly extensive Wikipedia page for him.

But there is no Wikipedia page for Abdelwahab Zaidoun, a 27-year old unemployed graduate from Rabat who, according to an InterPress Service paper, also died after setting himself ablaze in protest. A Google search of his name only yields one result in English, and even still, that article is from Morocco World News.

Perhaps Zaidoun did not fit the narrative. In Egypt, Tunisia, and Libya, there was brutal and bloody upheaval, but in Morocco, where citizens enjoy more advanced freedom of speech, protests remained peaceful. Citizens were not trying to overthrow a corrupt dictator; in fact, the majority of Moroccans approve of the monarchy as the country’s political system.

The country soon came to be known as the “exception” to the Arab Spring. Headlines at the time read: “How Morocco Dodged the Arab Spring” (New York Review of Books); “Why Has Morocco’s King Survived the Arab Spring?” (BBC); and “Morocco—An Arab Spring Success” (Council on Foreign Relations op-ed.)

Morocco’s vital statistics don’t set the country apart the way the press did. According to the World Bank, 9% of the population in Morocco lives below the poverty line; in Tunisia, it is 3.8%. Egypt’s poverty is high, at 22%, but an Egyptian’s life expectancy, at 73, is one year longer than that of a Moroccan’s.

According to UNICEF, the adult literacy rate in Morocco, at 56%, (it is worth noting that Morocco is linguistically complex) is lower than Tunisia’s (78%) and Egypt’s (66%.) In 2010, 61% of rural Moroccans had access to water. In Egypt, that number was 99%. A recent World Bank survey reported that 49% of Moroccan youth are neither in the workforce nor in school.

Perhaps for those more familiar with these realities, it was not surprising when thousands of Moroccans took to the streets in February 2011 to express frustration, protesting for economic, social, and constitutional reform.

One young woman, who wishes to remain anonymous, said that she protested in Casablanca against various injustices. “If you want to have your national card to be identified, you are treated like you are nobody and you are called with bad names.” With the police, she said, “You make a complaint and you can wait for a result forever.

The guy against you can just give them money and you become the one treated as a the bad one.” She also discussed the poor healthcare system and said that people “die waiting” to be treated.

In Morocco, the only kingdom in North Africa, protests were quickly deflated, possibly due in part to the king’s response. He did not unleash the police or army to control the protests. Another young Casablanca native who wishes to remain anonymous said, “This is where the king was very smart…he said no oppression, no killing. He said, ‘Let the people protest.’”

A few weeks later, on March 9, the king gave a highly publicized speech announcing a new constitution.  He promised “a new charter between the throne and the people” that would entail a new rule of law, an independent judiciary, and “elected government that reflects the will of the people, through the ballot box.”

Mohammed Masbah, a Moroccan fellow studying at the SWP Institute in Berlin, said of the March 9 speech, “I was surprised because what he said was really serious. He was not laughing at people…it was important. He absorbed their anger.”

The new constitution was drafted in a matter of months (there is varying opinion about if they had begun work on it before February 20) and by July 1, the document was ready for referendum.

The government’s official reports stated that 74% of the population voted on the referendum, and that the new constitution was approved by 98% of them. Foreign Policy magazine called these “preposterously unlikely figures.”

Regardless, Western sideliners were pleased as Morocco maintained its peaceful state and continued to progress towards democratic ideals.

In September 2012, Hillary Clinton said, “In many ways, the United States looks to Morocco to be a leader and a model… I commend Morocco and your government for your efforts to stay ahead of these changes by holding free and fair elections, empowering the elected parliament, taking other steps to ensure that the government reflects the will of the people.”

Fareed Zakaria, interviewing Morocco’s then Foreign Minister Taieb Fassi Firhi on CNN, said that Morocco “seems to be doing something right” and said that it seemed to be on the road to a “European-style democratic monarchy.” He stated the 98% figure as fact and did not question it.

The Wall Street Journal published an article titled, “Bahrain Could Learn From Morocco’s Model: The king is proposing major democratic reforms without a shot being fired.” An op-ed from a fellow at the Council on Foreign Relations called Morocco the “shining star in the Arab Spring” and read, “Always a leader in Arab political processes, [Morocco] again strode confidently forward…[and] emerged as the leader of the Arab world.”

This wave of press was shocking to Ahmed Benchemsi, who was the founder, publisher and editor of Morocco’s two best-selling newsweeklies, TelQuel and Nishan magazines, which consistently printed controversial and liberal pieces such as “The Salary of the King,” and “Sex and the Medina.”

Benchemsi was not arrested, imprisoned, or detained. The mistreatment was far subtler than that, he explained. First, magazine copies were seized, and later banned. Then there were trials, interrogations in police stations, and advertising boycotts. He wrote in a piece for the Neiman Foundation for Journalism at Harvard, “Since the monarchy controls Morocco’s big business…when orders were given to stop buying advertising in independent newspapers, all the big companies complied.”

After the bankruptcy of Nishan and the sale of his shares in TelQuel, Benchemsi left Morocco in February 2011, just before the Arab Spring, which he called a “subtle shaking of subtle dictatorship.”

He questioned the new constitution. In a speech at the Oslo Freedom Forum, Benchemsi pointed out that, although the king would no longer select the Prime Minister and the Prime Minister would now be selected from the party that holds the majority of parliamentary seats, there are 33 political parties in Morocco.

The majority party had only 16% of parliament, he claimed, and because only 24% of the total Moroccan population voted in the previous elections, the 16% figure in parliament represented 4% of the overall population. Not much of a majority, Benchemsi added.

In an interview, he said that his bottom line was that leaders in Morocco are “trickier than anywhere else” and that “Western journalists found their angle,” falling for it—a dangerous combination.

However, some are pleased with the recent changes. Now, for example, women have the right to initiate divorce and to give their name and citizenship to their children. The king also gave rights to children that were born out of marriage, a woman from Casablanca said.

Bouchaib Oumni, a Moroccan diplomat in the office of the Permanent Representative of Morocco to the U.N. in New York, said, “There are reforms taking place…what [the king] has done was in line with what had already started” in reference to the legal and constitutional changes.

Samir Bennis, a political analyst working within the U.N. community and editor-in-chief of Morocco World News, said, “The process of reform is there…people just need to be patient while at the same time fighting for their rights.” He continued, “The structural reforms that Morocco is facing now…unemployment, corruption, trade deficit, illiteracy…cannot be solved overnight.”

Bennis added that although the reform is there and the dynamic of change is positive, “Most Moroccans believe that there is still much work to do in order to turn Morocco into a real and genuine democracy.”

Mohammed Masbah also believes the country is making progress. “It’s the first time that [we] are criticizing or looking more closely at the monarchy,” he said. “Compared to the 1996 constitution, it’s a step forward…it’s not enough, but it might put infrastructure toward establishing a real democracy.” Masbah also pointed out that the king does not oblige people to kiss his hand, which was an old tradition highly criticized recently.

When describing the relationship between the king and the people, Masbah invokes a metaphor of a tenant and a landlord. The tenant finally has his own house, Masbah said, but the landlord has a key and can enter whenever he wants.

But Masbah hesitates to over-simplify the situation in his country. “Between the black and the white, there is the grey.”

Laura Dimon graduated from Barnard College in 2009 with a Bachelor’s degree in psychology. She has worked as a program analyst for The Clinton Health Access Initiative in Pretoria, South Africa, and as an intern at the Council on Foreign Relations. She is currently earning her Master’s degree in print journalism at Columbia University. www.lauradimon.com