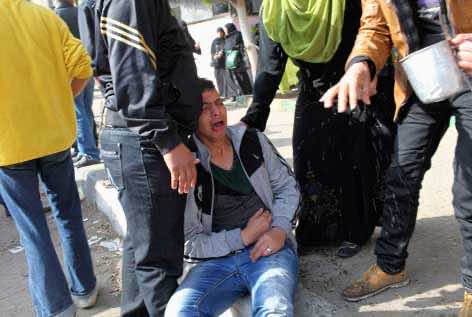 Twenty-one Egyptian football fans and club members were sentenced to death on Saturday after a deadly post-match riot in Port Said last year, sparking new violence in the canal city that killed eight.

The clashes erupted after a Cairo court handed down the death sentences over the football riot last February in which 74 people were killed, and came a day after violence swept Egypt on the second anniversary of its uprising.

As news of the verdict emerged, relatives of those condemned tried to storm the prison in Port Said where they are being held, leading to fierce clashes with security forces.

Troops are being sent to Port Said, a senior army officer said.

“It has been decided to deploy some units to work for calm and stability and the protection of public establishments,” General Ahmed Wasfi said in a statement carried by the official MENA news agency.

Medics said the death toll in the Port Said clashes climbed to eight, but it was not immediately clear if that included two policemen security officials said earlier had been shot dead.

Shops closed and armoured personnel vehicles were deployed as fighting raged in some streets around the prison.

In Cairo, both inside and outside court, there were explosions of joy. Women ululated, relatives hugged and shouted “Allahu Akbar” (God is greatest).

One man who lost his son in the Port Said clashes wept outside the court, telling AFP: “I am satisfied with the verdict.”

Another, Hassan Mustafa, had pinned a picture of his dead friend to his chest and said he was pleased with the verdict, but wanted “justice served for those who planned the killing.”

Last February’s riots between fans of home side Al-Masry and Cairo’s Al-Ahly also sparked days of violent protests in Cairo, in which another 16 people were killed.

Many Egyptians believe the violence was orchestrated either by the police or by supporters of ousted president Hosni Mubarak.

The Cairo court has handed its verdict to Egypt’s top cleric for his final opinion, as is customary, and set March 9 for delivering verdicts on another 52 defendants, including police officers.

The sentences come after a day of clashes marking the revolution’s second anniversary left at least nine people dead and 530 injured.

Tens of thousands took to the streets nationwide on Friday to protest against Islamist President Mohamed Morsi, who is accused of failing the revolution and consolidating power in the hands of his Muslim Brotherhood.

The country is also in the throes of an economic crisis as foreign investment and tourism revenues dwindle, the Egyptian pound stands at its lowest level against the dollar and a budget deficit shows no sign of reversing.

Early on Saturday, Morsi took to Twitter to appeal for calm, urging “citizens to adhere to the values of the revolution, express opinions freely and peacefully and renounce violence.”

The interior ministry said 95 of its officers were injured in Friday’s violence.

Morsi said policemen were also among Friday’s dead and expressed his condolences “to all Egyptians” over the deaths of both police and protesters.

Troops in armoured vehicles deployed in Suez late on Friday, taking up positions at the entry of the canal, outside police headquarters and the governorate building.

In the Mediterranean city of Damietta, protesters surrounded the governorate building and blocked traffic. In the Nile Delta city of Kafr el-Sheikh they stormed the courtyard of the governorate and clashed with police.

In Cairo, police fired tear gas at protesters outside the presidential palace, where clashes between Morsi’s allies and foes in December killed several people.

Army and police forces were deployed to protect the building, which houses the information ministry as well as state television and radio.

Protesters also set fire to tyres and blocked traffic in both directions on the 6 October bridge over the Nile, a flyover that connects east and west Cairo, and blocked the underground metro at several stations, paralysing public transport.