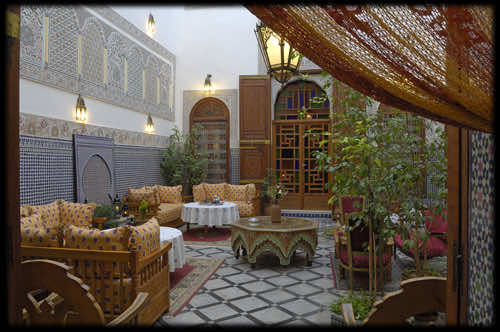 Fez – In the heart of the medina of Fez—a UNESCO World Heritage Site—a new project to attract tourists began in 2008. The project involved 26 families in the tourism sector. The families involved are owners of houses with traditional architecture and decorations. Many of these people have little to no income.

The tourism project is part of the National Initiative of Human Development, a committee which specializes in tourism. The group visited the traditional houses and decided which ones should be chosen to be part of the project and which homes would be excluded. Their selections were based on the extent to which the houses are traditional, on the geographical situation and also on the reputation of families themselves–as they are meant to represent the Moroccan culture and the customs of the millenary city of Fez.

Financial support to rehabilitate the houses was given to the families who were in need of this funding. They built new bathrooms, bought new furniture and had to prepare suitable rooms for the tourists. The families received training for some months by some prominent university professors from the University of Fez. Training included some sessions focusing on cooking, hygiene, language, the history of Fez and, most importantly, the way to deal with tourists taking into account the cultural differences between the hosts (the families) and the guests (tourists) so as not to fall in the trap of cultural shock.

The primary goals of this project were first to stop people from selling their traditional houses –that are part of the traditional heritage of the medina of Fez– to foreigners. This phenomenon caused anxiety for the people of Fez. So, now as these houses will generate revenues for their owners, there will be no need to sell them.

Another goal is to involve the people of the Medina in the tourist sector, to enhance tourism, protect the wealth of Morocco and create job opportunities for local people as an initiative to sustain tourism. Before the project, these families were just owners of collapsing houses and now they have safeguarded their previous status and became managers of their own projects.

The third goal is to make the relationship between the tourist and the local culture intimate. Tourists will have to share the life of these families and so appropriate their knowledge about the Moroccan culture not through media or shallow tourist brochures or postcards, but through close contact and experience with Fassi people. Likewise, they will see how local people live their daily life inside homes.

This project is well organized. Families receive reservations from tourists through the secretary of an association called “Union.” The group informs families through the website of Ziyarates, which includes the pictures of the 26 homes. Tourists choose the house that they like most.

Undoubtedly, this project does not only help tourists have a real encounter with the local culture but also helps the host families to meet people from different cultures and geographies. It is, actually, enriching for both sides. The quality of the houses differs from one house to another and some families receive much more tourists than others.

This is a very good initiative, for it aims at achieving various goals. The concept of Ziyarates is based on the cultural and the authentic side. It lures tourists because of its authenticity and originality. Besides, it managed to motivate the local population to preserve the heritage that attracts tourists because now they are involved in it. Families earn money and they invest them in their houses by rehabilitating and saving them from collapse. In 2012, another group of selected traditional houses were involved in the same project and they will have to receive the same training, etc.

This is a real step towards sustainable tourism.

The following is an interview by Morocco World News with the manager of one of the homes who preferred to speak under the condition of anonymity.

MWN: How did you come to know about the project?

Interviewee: It was just a good coincidence. I was intending to sell my house for a huge amount of money. Then I was informed by a friend that there is a project that gives support to owners to rehabilitate their houses and start receiving tourists. I was pleased because in fact selling the house was not a good choice. I went to the province of my neighborhood and got my name listed.

MWN: Did this project help you improve your life financially?

Interviewee: Indeed, it did. It’s true that it does not make you rich but at least it helps. This is the spirit of the project. Yes, financially, there is a huge difference.

MWN: What problems does this project face?

Interviewee: Perhaps, one of the problems that comes to my mind is advertising. We are mostly known to the French market. I noticed that a great majority of the tourists I receive from Ziyarates are French. We need advertisements for our project to survive. To do this we need help from the authorities because financially the families are unable to do that for themselves. Another problem is the distribution of reservations. Some families benefit more than others. This is a real problem. So, at the end of every year, we find that the revenues of some families are quadruple those of other families.

MWN: Do all your tourists come from Ziyarates?

Interviewee: No, not necessarily. We receive them from Ziyarates as we can receive them outside of Ziyarates. Some families have their own websites so they receive reservations through them or by recommendations from other tourists.

MWN: why do you think tourists choose to live with the families?

Interviewee: perhaps because they want to have a new experience other than that of hotels. The tourists who come are sociable, dynamic and very curious to know about the culture, cooking, religion, celebrations, etc. Probably, hotel workers cannot satisfy their curiosity enough. They cannot enter with them to the kitchen or have meals with them.