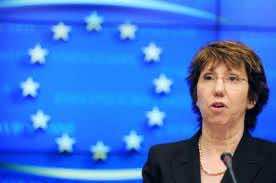 “It is with great concern that the High Representative heard about the violent clashes in Port Said leaving several people killed,” Ashton’s spokesperson said in a statement.

“She also urges the Egyptian authorities to restore calm and order and calls on all sides to show restraint in the best interest of the country at this delicate time in its democratic transition.”

At least 30 people died and 312 were wounded in the street clashes, which began Saturday only minutes after 21 supporters of a local football club were sentenced to death over a bloody stadium riot in the canal city.

The violence comes a day after nine people were killed in protests against President Mohamed Morsi on the second anniversary of Egypt’s uprising against predecessor Hosni Mubarak, in the worst crisis Morsi has faced since taking power in June.