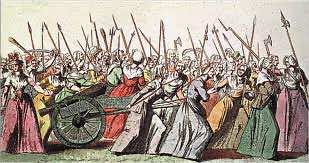 Women of the popular classes in revolutionary Paris, 1789-1795, is an article written by Darline Gay Levy and Harriet B. Applewhite. It discusses the issue of gender in relation to war, but more specifically in relation to revolution. It shows how French women participated in the revolution and were able to voice their concerns.

Lot of women appeared to be part of a certain nation, but did not perform lead roles in the revolution. Common women had a significant impact on the men and institutions involved in revolutionary power struggles. This article questions certain assumptions about women’s involvement in revolutionary politics that appear in recent historical writing, since some historians stress the failure of women’s political efforts.

The study is mainly based on documents that place women in the political context of revolutionary Paris and shows the evolution in their political activities. Women were central figures in food riots and market disturbances since they were the ones who managed their family’s income. Political changes in eighteenth century France affected political institutions in Paris and touched the lives of common women. For this reason, women joined protests and denunciations of despotism. There were fewer exclusively female guilds than male guilds and limited inclusion of widows in others but those women who had guild protection feared its removal.

On the eve of the revolution, women faced a government whose officials at both the local and national levels were trying to decrease their fiscal, judicial, and provisioning operations. Sometimes women coped with these changes, sometimes they protested and sometimes they rioted. They were not “prepolitical”. The revolution in Paris gave women the opportunity to evolve from subjects, sometimes passive, into participating citizens.

Women adopted new techniques of democracy. They tried to combine subsistence demands with broader demands for public recognition of their rights as democratic citizens. Women made claims based on patriotic or republican interests. The great fear in the countryside outside Paris, the food shortage and movements of people into Paris led to the women’s march on October 5th to Versailles. The result of these events was to mobilize Parisians for the national power struggle and to confront them with new or transformed institutions through which that struggle would be carried out.

In January 1789, women identifying themselves as “women of the third Estate” published their petition to the king. They claimed that they were excluded from national assemblies by laws. They accepted their roles as subjects but by entrusting their king with the full responsibility of representing their interests and satisfying their needs. Jennifer Dunn Westfall said in an unpublished thesis that there were at least three discrete populations of women marchers, fishwives women representing the city, and women who came from a particular parish and who were accompanied by their parish clergymen.

Women thanked heaven for the conquest of liberty. These marchers who expressed both their concerns and their new interest in justice and liberty were accompanied by contingents from the newly organized Bourgeois National Guard.  They were not petitioning but only participating in acts of thanksgiving.

Peaceful but highly organized and conspicuously escorted by the National Guard, these processions of thanksgiving with the people’s church and the new bourgeois municipal government as targets can be read as dress rehearsals for the October days.  Women, who gathered at the hotel de ville demanding that la Fayette lead them to Versailles to get bread, came from some of the same market districts and faubourgs which had supplied marchers for the summer thanksgiving processions.  The fact that women got to Versailles showed that women acquired a political education. Some women had the opportunity to have an audience with the king. They did not only ask the king for bread for Paris, but they demanded escorts for four transports to be sure that they would arrive there. The king provided them the escorts.

In an account of the October days, a journalist noted that women occupying the meeting place of assembly voted with the deputies on motions and amendments relating to legislation on the circulation and distribution of grains.  The thousands of women who marched to Versailles on October 5 were very organized but their alliance with the National Guard and their impressive numbers gave them the power that contributed so heavily to their success.  The thousands of women who returned to Paris on October 6 had become part of a complicated political struggle for control of the revolution. Women learned how to be active citizens and thus yield impressive results. Women were able to take part in the Cordeliers club debates and in debates in other clubs.

In 1791, women were prominent among members of the Cordeliers club and the popular societies who gathered on the champ de la federation and signed a petition to the national assembly.  Some women who signed the petition were threatened by mayors and members of the bourgeois National Guard. Among those who marked the petition were women unable to sign their names. They brought their children to accomplish the task. Women of the people in Paris had begun to institutionalize their political activities within clubs and popular societies. They became interested in issues of royal legitimacy and the extent of suffrage at a critical moment in revolutionary history.

The participation of women in petition signing at the Champ de Mars indicated that they were looking critically not only at royal authority but also at the constituent assembly. Women who gathered at the Champ de Mars were willing to take a stand on revolutionary political issues that were not ‘bread and butter issues’. The Femmes Sans- Culottes stepped up the pace of their political activity and focused it principally on subsistence concerns. They were in a position to articulate from their strengthened organizations in the sections the common people’s demands.

In 1793, several delegations of citizens appeared at the national convention. The events that occurred in February showed that the Parisian Femmes Sans-Culottes worked within and on the margins of revolutionary institutions. The response of authorities to the feminine politics of violence changed over the course of the year. Common women of Paris succeeded in establishing their own institutional base, the Society of Revolutionary Republican Women. The convention voted to require all women to wear the revolutionary tricolor cockade in public.

The society’s members were aggressive and relentless in pressing the revolutionary authorities to enforce this legislation energetically. A day after the dissolution of the Society of Revolutionary Republican Women, they have undermined the political power of the enrages and the revolutionary republicans, among the last groups capable of exerting programmatic efforts on behalf of the common people.

Women did continue to contact authorities but generally to petition for the satisfaction of personal demands and not to represent larger issues, in part because the organizational bases from which such confrontations would normally come had been eroded by the government of the terror. Officials feared crowds of women as the most serious threat to public order. Furthermore, Women began as subjects who reacted to elite initiatives by passionately guarding traditional prerogatives, but they learned to operate as citizens working through revolutionary institutions to demand the satisfaction of needs as rights which were abstract and sophisticated and which included political power.

This article is concerned not only with describing how women came to work through organizations for revolutionary goals, but also with explaining why they did so and whether their efforts had political significance. Female political leaders often emerged from marginal social positions or from occupations such as printing and publishing that put them at the center of political communication.  Women signed petitions, marched and demonstrated, attended meetings, formed deputations, and persuaded, frightened, or coerced political authorities to accede to their demands.

The crucial variable determining the nature and extent of women’s political influence is the availability of political institutions geographically proximate, sympathetic to women’s interests, and open to women as spectators, petitioners, delegates, and members.  Women who were in Paris were able to move during the revolutionary mobilization into popular societies, the section assemblies, and the galleries of the commune and the national legislatures. Two generations later, the granddaughters of the women of the revolution would consider them as heroines, remembering that they had been among those who began the fight for popular control of political power.

Finally, what is unique about the French revolution, compared to other revolutions in the eighteenth century world, is that it was democratic revolution that engaged an entire nation of French men and French women in the struggle for influence and power as citizen participants.

The status of women in France did undergo significant fluctuation between 1789-1795. Common class French women had been politically engaged in the French revolution. During times of famine where bread was unavailable, women marched to the civic center in order to ask for their rights and ameliorate their misery. However, Parisian women marched to the royal palace and sent their petitions directly to the king who was responsible for voicing their concerns. Later, they marched to the national legislature. Parisian women were known by expressing their opinions through petitions, demonstrations, and the system of taxation.

Meryem Fati is currently a doctoral student at the Faculty of Education, Mohammed V- souissi- Rabat, Morocco. She is working on cross- cultural communication. She was a Fulbright scholar and affiliate at Kansas University. She is a language and communication instructor at Mohamed V university- Agdal- Rabat, Morocco. She participated in Moroccan and international conferences and she served as a co- translator of Khadija: the First Muslim and the Wife of the Prophet Muhammad By Resit Haylamaz..