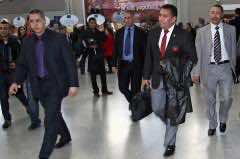 Morocco failed to secure a way through to the quarter-finals of the African cup of nations after a draw match against the host South Africa 2-2 in Durban on Sunday.

A late equalizer for South Africa’s Bafana Bafana and a victory for Cap Verde over Angola 2-1 evaporated every hope left for Taoussi’s squad to move forward in the tournament.

The Moroccans were the first to take the lead by Issam Adoua’s header which was deliverd from the corner by Abdelaziz Bararada and dropped in off the South African crossbar in the 10th minute.

The goal kept alive the hopes of Morocco to progress in the competition as it continued the pressure over the host with brilliant chances to extend the lead. The Moroccans’ efforts lacked efficiency and concentration.

Kamal Shafni missed another opportunity when he failed to translate a one-on-one situation with the South African keeper into a decisive goal just before halftime.

South Africa managed to look differently in the second half and play with more enterprise with two free kicks from Thuso Phala testing Nadir Lamyaghri.

The South African persistence yielded a goal in the 71st minute by May Mahlango the things that reshuffled all the Moroccan cards once again and put it inside a labyrinth of complicated maths.

Morocco had to switch tactics to avoid a quick disqualification by shifting momentum and throwing more players forward. The efforts were rewarded when Abdelilah Hafidi scored just eight minutes before the end of the match.

The Moroccans failed to hold the lead when Sangweni of South Africa found himself clear in front of Nadir Elmyaghri to curl the ball between two defenders in the 86th minute.

In spite of the equalizer, Moroccans still believed in qualification until the last minutes of the extra time when Cap Verde succeeded to score in front of Angola 2-1 and abort every left hope.